BE BOTH THE MAN & THE BEAST | The Prince by Niccolo Machiavelli 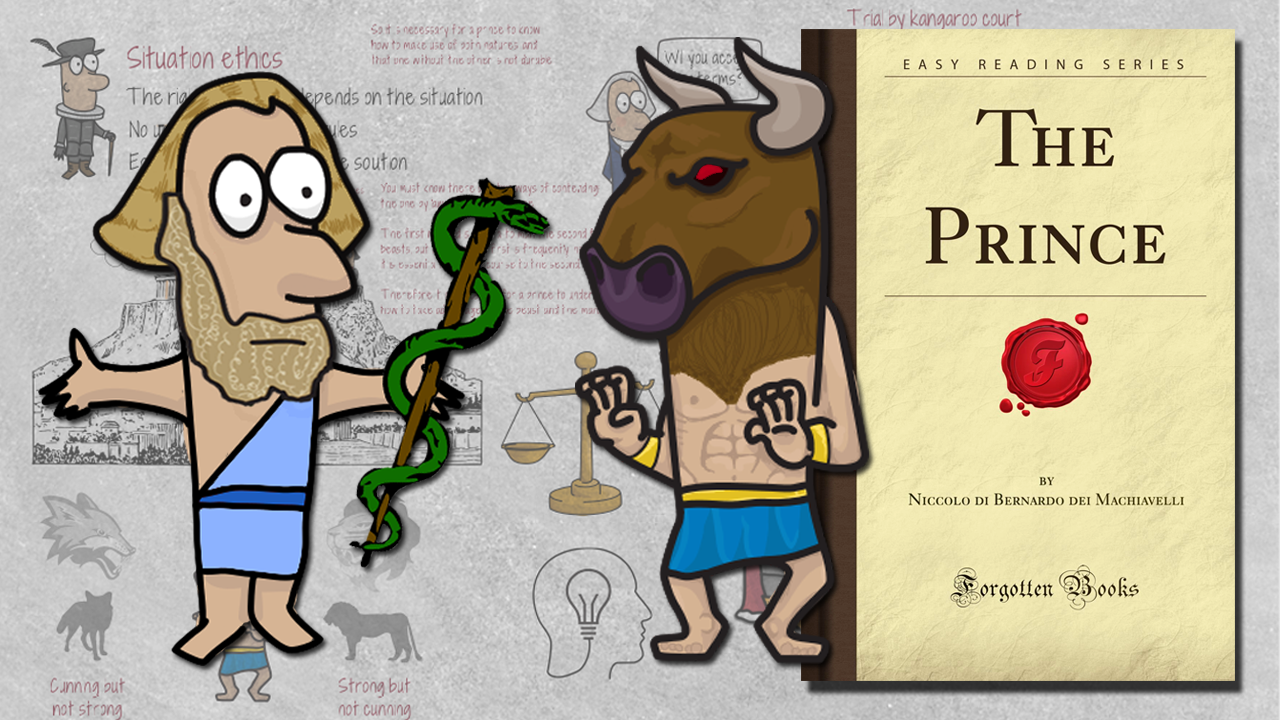 In Greek mythology, many ancient Princes including the three heroes Asclepius, Achilles, and Hercules, were nurtured and educated by a teacher that was half man, half beast. This creature went by the name of Chiron and was known as the wisest of all the centaurs. Chiron taught the heroes how to act like men by using a keen mind, but also how to behave like a beast with a strong will to survive. Machiavelli used the metaphor of Chiron to illustrate his view that Princes should use a combination of cunning and brute force. Failure to use both these sides of nature would result in a failure to survive.

You must know there are two ways of contending: the one by law, the other by force. The first method is natural to man the second to beasts, but because the first is frequently insufficient it is essential to have recourse to the second. Therefore it is necessary for a prince to understand how to take advantage of the beast and the man.

A good leader must love peace but also be well aware of how to wage war. Civilised people use the law to settle differences and disputes. Fighting by law is natural to men and involves using rational thinking and discussion, but the law does not always work in our favour and therefore often proves inadequate. In such situations, Machiavelli declares it wise to behave in a more forceful manner to intimidate and frighten, enabling you to get your way. It's all well and good to rule compassionately but sometimes this proves insufficient and arms are needed to secure your position. To stay in power, when circumstances demand it you need to act differently. It therefore may be necessary to resort to an animalistic show of force.

So it is necessary for a prince to know how to make use of both natures, and that one without the other is not durable.

When a Prince is channeling the nature of the beast, Machiavelli states that there are two different animal instincts that he should master and mimic. He should attempt to be both a lion and a fox.

A lion is mighty and brave, so strong that he often doesn’t even need to fight, as his size and reputation can keep opponents (and his own people) at bay. However, it is an error to rely only on the lion as it is not particularly crafty or shrewd, unlike the wily fox. What the fox lacks in strength, it makes up for in cunning, easily being able to spot deceptions and escape traps. This is especially important in issues of diplomacy to avoid any potential pitfalls.

To gain power and thrive, a combination of cunning and strength is required. When civilised debate does not provide you with victory in the argument, arm-twisting may be necessary. However, too much force will see you viewed as a bully. Mix your strength with craftiness, cultivate them both and use either when appropriate to overcome any number of challenges. This combined skill set of both beasts will make any leader a formidable opponent, as the differing weaknesses of each beast are overcome by the other’s talents.

In The Prince, Machiavelli appreciates that rulers need to behave differently depending on the circumstances. Be cautious when caution is necessary and be courageous when courage is required. Adaptability is important. The idea of taking context into account when evaluating an act ethically is key. Machiavelli did not advocate blindly following an ideology, nor judging behaviour according to absolute moral standards.