Seneca: Letters from a Stoic 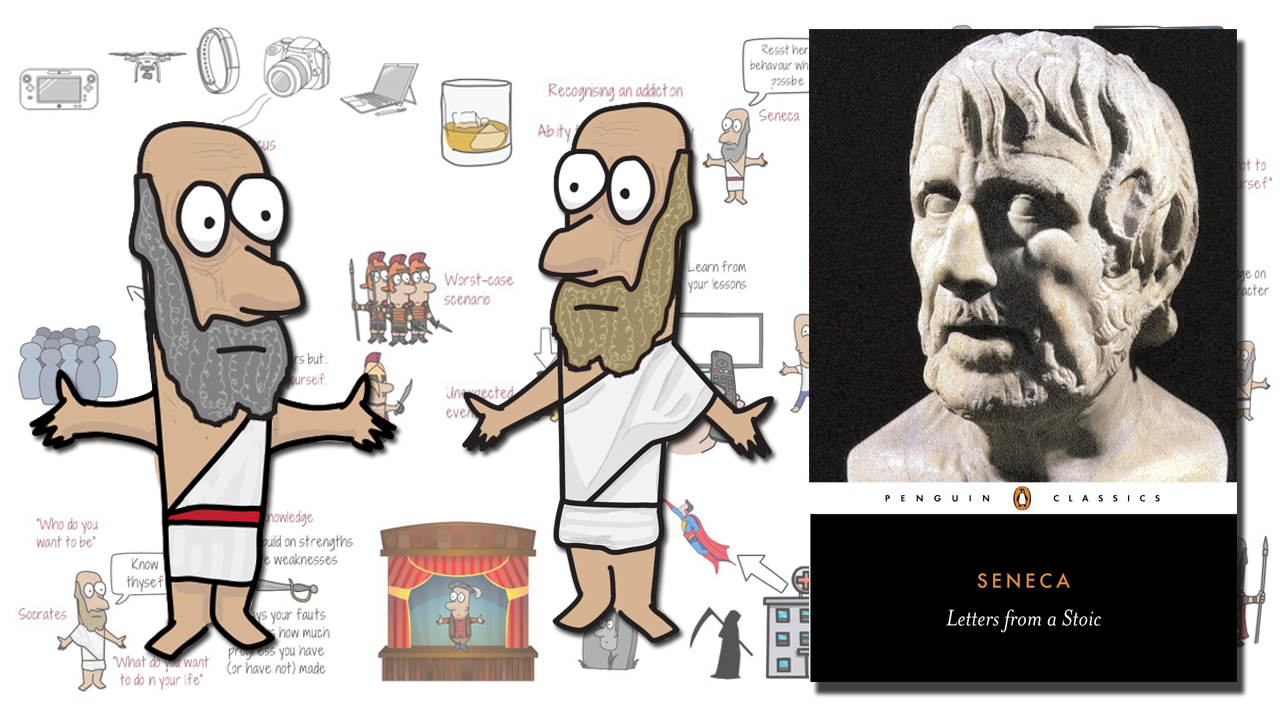 Letters from a Stoic is a collection of 124 letters the philosopher Seneca wrote to his friend, Lucilius. They are packed full of wisdom and guidance. Written below is some of the advice that impacted me the most when I read the letters, with an explanation of how each quote is still relevant in today’s modern world.

A plant which is frequently moved never grows strong.

We live in a world where it is easy to get distracted thanks to the abundance of information around us and at our fingertips. If we are constantly rushing around from one pleasure or temptation to the next, we cannot reap the benefits of sticking to one pursuit and taking the time to develop it.

Focus. Flitting about physically or mentally will restrict your ability to fully understand and advance your strategy and goals.

In the case of some sick people it is a matter for congratulation when they come to realise for themselves that they are sick.

Recognising an addiction, a bad habit or any other flaw in yourself is progress as it allows you to take responsibility to deal with, or change, that weakness. Ignoring your faults will obstruct any potential to improve and change. A lack of self-awareness will lead to stagnation.

You ask me to say what you should consider it’s particularly important to avoid. My answer is this: a mass crowd.

When the mind is impressionable and has none too firm a hold on what is right, it must be rescued from the crowd: it is so easy for it to go over to the majority.

Seneca talks of attending a lunchtime “show” which rather than being fun and relaxing as he expected, instead consisted of violence and slaughter. The crowd condoned and encouraged these acts, cheering on the brutality. Similar behaviour can be seen today at sporting events, with thousands of people chanting obscenities together. These events may provide a tribal sense of belonging but does nothing to help aid the development of the people taking part in it.

Seneca’s solution is to avoid the crowd where possible as mingling within them is a constant risk. The influence that the masses can have on an individual is uncontrollable and often can’t be consciously avoided. Where possible resist herd behaviour and the phenomenon of social proof in an attempt to conform. The group’s view may be right or it may be wrong, but the important aspect is that you decide which it is. As Peter Thiel said in his book Zero to One: “The most contrarian thing of all is not to oppose the crowd but to think for yourself.”

What difference does it make, after all, what your position in life is if you dislike it yourself?

When deciding on your path in life, listen to others but ultimately decide for yourself.

If you want a man to keep his head when the crisis comes you must give him some training before it comes.

In a time of peace, you must prepare for war. The stoic strategy of preparation covered both the mental and physical aspect. That way, instead of just being ready for how we imagine the future will turn out, we can also handle unexpected events and worst-case scenarios.

A soldier practices drills and exercises constantly so that when the time comes, he knows exactly what to do almost instinctively.

A good character is the only guarantee of everlasting, carefree happiness. Even if some obstacle to this comes on the scene, its appearance is only to be compared to that of clouds which drift in front of the Sun without ever defeating its light.

We live in a world of increasing material pleasures and distractions, but do they help or hinder us to achieve a good life? The really valuable things in life cannot be bought such as friendship, love and integrity of character. Happiness can be something you possess regardless of your circumstances.

The key is your attitude, your character. It will determine how you react to life’s obstacles and how you handle them.

If you get distracted and do not achieve your goal, is it a failure or is it a lesson to be learnt and used to fuel a better attempt in the future?

If you get rejected, is it permanent or a stepping stone on the meandering path to success?

The right character makes you unstoppable, the wrong character can stop you from even starting. Many pleasures can be bought, but you cannot pay for someone else to form your character.

Treat your inferiors in the way in which you would like to be treated by your own superiors. Only an absolute fool values a man according to his clothes, or according to his social position, which after all is only something that we wear like clothing.

Seneca describes a man that when buying a horse inspects the saddle but not the animal itself as “a fool”.

In our world, many people spend a lot of time working on their appearance or curating the perfect photos for social media.

Do not pay too much attention to their appearance. Their popularity may stem from an unenlightened audience. Looks can be deceiving and may be a front that hides anxiety, fragility or an overall lack of confidence.

Judge someone on their character, rather than their social status, looks or possessions.

Why does no one admit his failings? Because he’s still deep in them. It’s the person who’s awakened who recounts his dream, and acknowledging one’s failings is a sign of health.

To “Know Thyself” as the great Socrates once spoke of, is difficult to achieve. Once gained, self-knowledge is beneficial as it will allow you to build on strengths and improve weaknesses. The first step to improving is being conscious of your failing. Only when we are aware of our vice, can we change how we behave towards it. However, it is not always a pleasant experience as self-knowledge displays your faults and shows how much progress you have (or have not) made.

This double-edged sword can make it seem appealing to avoid examining yourself and stay unaware. But without assessing your character you will be unable to answer questions such as who do you want to be or what do you want to do in your life and where you are with regard to achieving both those objectives. By being perceptive and making sound, but self-critical judgements alongside the ability to take action, self-knowledge allows us to work on our failings.

As it is with a play, so it is with life — what matters is not how long the acting lasts, but how good it is. It is not important at what point you stop. Stop wherever you will — only make sure that you round it off with a good ending.

A good play like a good life is not judged on its length but on the quality within it. The play can come to an end at any time and every life will come to an end at some point. If you find yourself on autopilot or in a position you were not expecting to be in, ask yourself if your play is worth watching and are you, as the leading character, performing well?

Illness has actually given many people a new lease of life; the experience of being near to death has been their preservation. You will die not because you are sick but because you are alive. That end still awaits you when you have been cured.

There are countless stories of people who were close to death, surviving the experience and going on to live their lives to the fullest as a result. This transformation comes down to a reflection on the fragility of their life and the uncertainty of their future that many others have not achieved.

“Your time is limited, so don’t waste it”, Steve Jobs once said. By enduring and then reflecting on painful ordeals, you can use them as a way to become a stronger and more purposeful in your quest for greatness.

These are conditions of existence which we cannot change. What we can do is adopt a noble spirit, such a spirit as befits a good man, so that we may bear up bravely under all that fortune sends us and bring our wills in tune with nature’s.

One can do nothing better than endure what cannot be cured and attend uncomplainingly the God at whose instance all things come about. It is a poor soldier that follows his commander grumbling. So let us receive our orders readily and cheerfully, and not desert the ranks along the march — the march of this glorious fabric of creation in which everything we shall suffer is a strand.

In order to stay calm when facing hardships or misfortune, prepare for these situations in advance of them actually occurring. Think about how things could go wrong and how you would deal with them if they did. Accept whatever happens with an honourable spirit, rather than fighting against it.

Buy the book Letters from a Stoic, which helps me provide more great content for free.