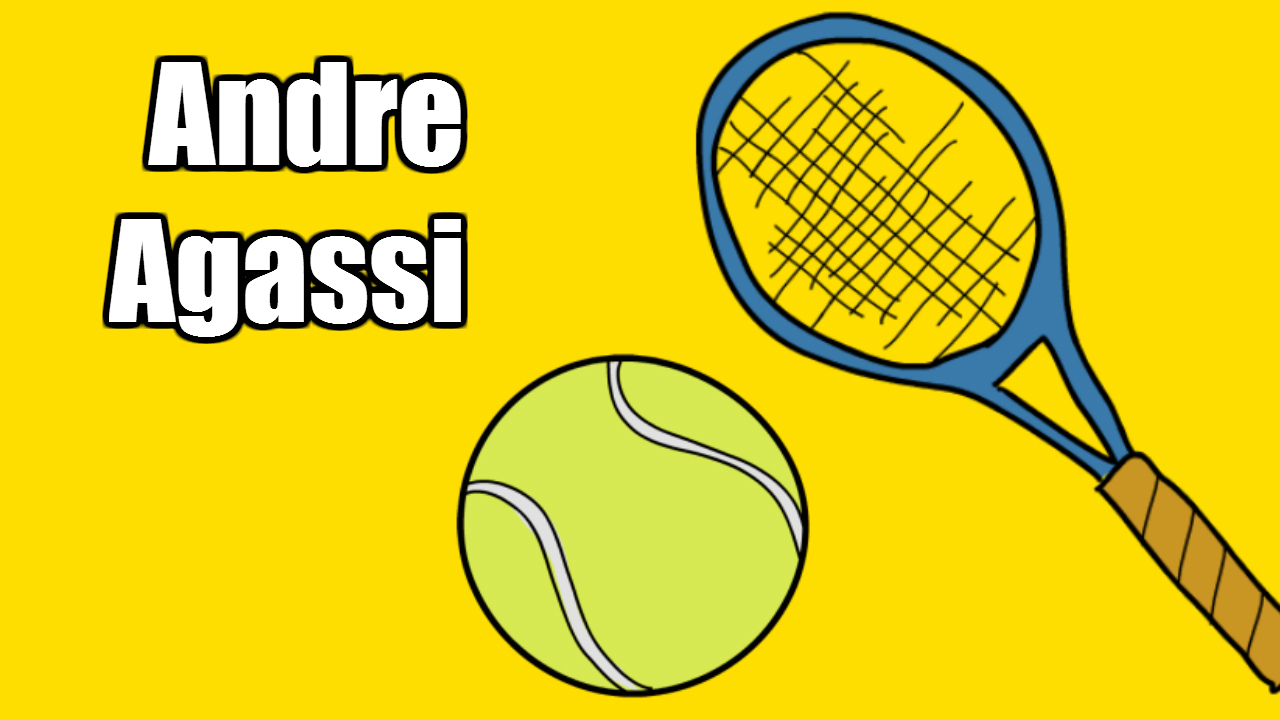 Even at the age of seven years old, Andre Agassi hated tennis. His father used to make him return 2,500 balls a day on the tennis court, that’s nearly a million a year, all being fired at him from a souped-up ball machine he called ‘the dragon’.

The tennis court was built by his father in the backyard of their house, which sat in the middle of the desert next to Las Vegas. What was a tennis court to most people was a prison to Andre Agassi.

His father was a tough man, a former boxer who represented Iran in the Olympics twice. In boxing terms he taught Agassi to be a great counter-puncher on the court i.e. a great returner of serve.

His mother, Betty married his father in 1959 in Chicago. Andre Kirk Agassi was their fourth child, born 29th April 1970.

At eight years old Agassi started playing tournaments against children under ten. He won the first seven of them.

At the local tennis club one day, Agassi’s father spots the famous American football player, Jim Brown. Brown is looking to play a game for money and a $10,000 wager is set on the outcome of the match between Brown and a young Andre Agassi, aged nine. While Agassi’s father gets the money the owner of the club dissuades Brown from taking the bet and they eventually agree to play two sets, then decide how much to bet on the third. Agassi wins the first two sets: 6–3 6–3. Jim Brown decides to only bet $500 on the third, which he loses 6–2.

Andre’s older brother Philly was also made to play tennis and warned Andre that if their father ever gave him a white pill before a match, to purposefully play badly and feign illness. This happened a while later. The pill his father gave him was speed to try and give him a competitive edge but Agassi deliberately lost and the brother’s plan worked. His father never gave Agassi a pill again.

Agassi is his father’s last hope of having a child who can become the tennis world number one so he decides to send him to a tennis boarding school in Florida which is a boot camp for young tennis players. The family can only afford to send him for three months as the school costs $12,000 per year, but after the owner of the school saw Agassi play, he called his father, ripped up the cheque and said Agassi can stay free of charge.

Whilst at the school, Agassi rebelled. His grades were bad, he drank, smoked pot and got an earring and a pink Mohawk. At 14 years old he quit schooling and took up tennis training full time.

At 15 he was receiving wildcard entries to tournaments, beating grown men and working his way up the rankings. He received no prize money as an amateur but did get paid expenses. On his 16th birthday he turned professional.

His brother Philly became his full time travel partner, helping Agassi with everything when he hit the road.

His first tournament as a pro sees him reach the final. His first grand slam was the 1986 US Open, but he lost in the first round. He does, however, break into the world top 100.

Agassi then goes on a losing streak and is on the verge of quitting the sport due to lack of money, to the point where he gave away his rackets to some homeless people in a park, but in what was to be his last tournament, he beats the Wimbledon Champion Pat Rafter in a huge upset.

In 1987 Agassi wins his first tournament as a professional, the winner’s cheque is $90,000. His popularity increases in 1988 and people in the crowd imitate his look, sporting denim shorts and a mullet haircut.

He moves up the rankings to number four in the world but struggles in longer games due to his lack of size and strength. In the second half of 1989 he starts training with Gil Reyes, the University of Nevada, Las Vegas strength coach and his conditioning greatly improves. He sets himself a target to win a Grand Slam.

One little known fact when Agassi was playing tennis as a young pro was that despite being known for his long hair, he was in fact going bald and was wearing a hairpiece. In 1990 he reaches his first Grand Slam final at the French Open but loses. He was more nervous than normal as his hairpiece had fallen apart in the shower the night before and he was worried it would unclip and expose his secret to the world during the match.

By August 1990 he’d put on ten pounds of muscle and had made the final of another Grand Slam, this time the US Open. He’d removed the hairpiece in favour of a thick hairband and coloured highlights but it doesn’t help and he loses again.

At the French Open in 1991 he again reaches the final but loses for a third time. His fourth Grand Slam final was at Wimbledon in 1992 and at the age of 22 he finally becomes a Grand Slam Champion. He calls his father after the match and can hear him wiping away tears and sniffling on the other end of the line. He’s made his father proud.

Agassi doesn’t play much tennis over the next few months due to a wrist injury and eventually has surgery. Around this time he starts dating the actress, Brooke Shields. He also gets a new tennis coach — the former player, Brad Gilbert.

Agassi goes on a losing streak whilst learning his new coach’s methods of training and enters the 1994 US Open unseeded with a world ranking of twenty. He becomes the first unseeded player to win the US Open since 1966. The first player ever to achieve that was the grandfather of Brooke Shields and she’s sitting in Agassi’s box in the crowd to see him win.

Before the next Slam, Agassi shaves all his hair off. It makes no difference to his game as he wins his second Grand Slam in a row and becomes the Australian Open Champion. A few weeks later after some more good performances, Andre Agassi is announced as the new world number one, the 12th player to be number one since the rankings began, twenty years previously. He’s become the best in the world at what he does at 25 years of age.

His next challenge is to win all four Grand Slams. He’s won three already and just needs the French Open to complete the set and become the first American to do so.

In the meantime, Agassi proposes to Brooke Shields after being an item for a couple of years and they start planning their wedding.

Agassi also follows in his father’s footsteps in 1996 and becomes an Olympian. He wins gold at the Atlanta Olympics.

On 19th April 1997, Agassi and Brooke Shields got married. However, on the court things were not good. Agassi was losing matches, many in the first round of tournaments and on top of that, he’d started taking drugs and getting high. His ranking slips to 141 in the world.

He is told that he’s failed a drugs test and could face a suspension from tennis. He writes to the ATP and lies, saying his drink was spiked with crystal meth and he didn’t knowingly take drugs. The ATP accepts his explanation and the failed test is thrown out.

Around this time Agassi meets Nelson Mandela and despite being at this low point is inspired to turn his life around. He begins training in tennis properly again and starts entering low ranking tournaments, eventually winning them.
But as his world ranking improves, his relationship with Brooke Shields worsens. They’ve grown apart and divorce five years after first getting to know each other.

In 1999 Agassi enters the French Open. He’s 29, which is old in tennis terms and it could be his last chance to win his fourth, and so far elusive, Grand Slam. He reaches the final where he finds himself two sets down but battles back winning the next three, and the Championship.

The Women’s Champion that year was Steffi Graf. Graff and Agassi were the only two people to have won all four Grand Slams and an Olympic gold medal. Later in 1999, Agassi and Graf start a relationship. Graf announces her retirement from tennis soon after but Agassi goes from strength to strength, winning the US Open, his fifth Slam and regaining the world number one ranking. He continues by winning the 2000 Australian Open the next year, a feat he repeats in 2001 to become a seven-time Slam winner.
In 2001, Agassi marries Graf and they have their first child, a son. He’s also built a school that has just opened as part of a charitable foundation that he previously started.

In 2003 Agassi wins the Australian Open again, his eighth and last Grand Slam victory. Later that year Agassi and Graf have their second child, this time a daughter.

The 2006 US Open was Agassi’s last tournament. Severe back problems forced his retirement after 21 years playing the sport as a career. It was a sport he openly admitted to hating many times, but is nonetheless considered one of the greatest ever players of it.

Buy the book Open: An Autobiography, which helps me provide more great content for free.