Made In America by Sam Walton 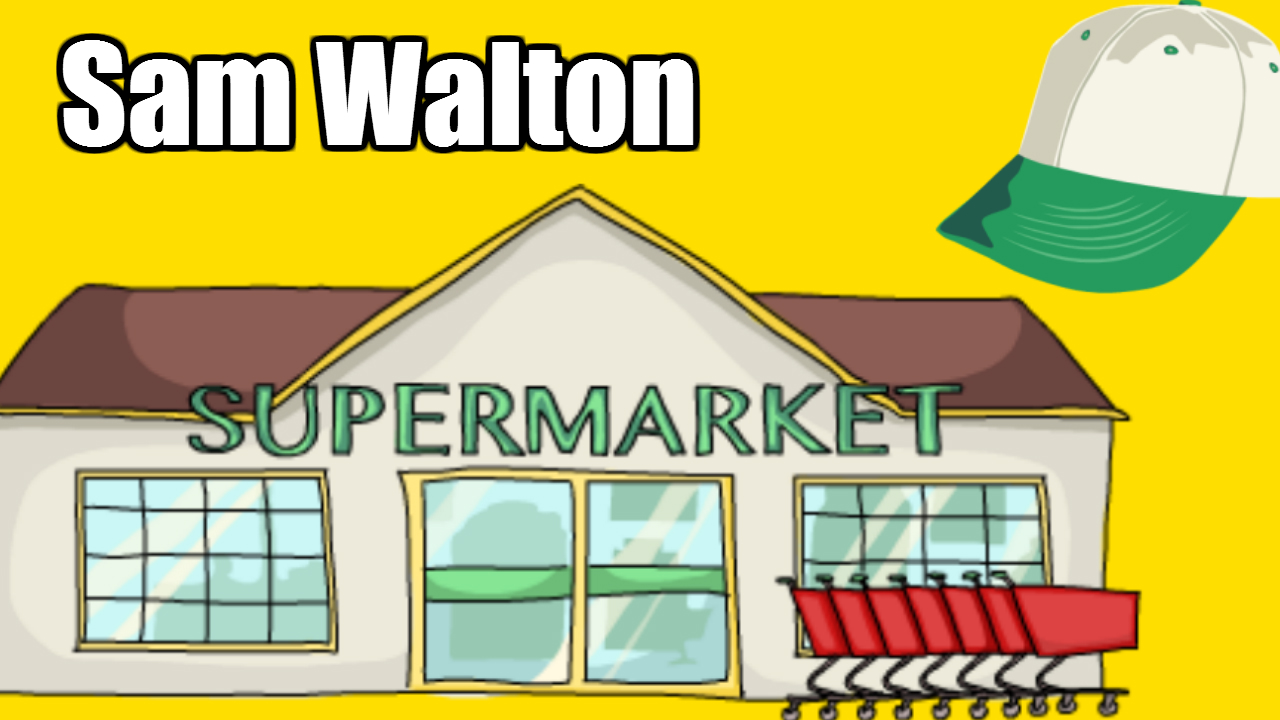 Sam Walton built a business which now has over 11,000 stores in more than 28 countries. How did he build the world’s largest company in terms of revenue, in the world?

Founded over 50 years ago, Sam had many personal traits that helped Walmart grow from a single store to the largest retail outfit there is.

He was not reflective, there was no dwelling in the past. The motivation for him was not money, but he was motivated to be top of the heap. The number one element that made a difference to Walmart was his passion to compete. This passion kept him constantly on the go and kept him looking ahead at all times… usually looking ahead to the next store opening.

This is the unique story of Walmart.

Many of the individual qualities Sam spoke about helped him to achieve what may seem impossible to some people. Risk, entrepreneurship, hard work, knowing where you want to go and being willing to do what it takes to get there. Believing in your idea even when others don’t. Sticking to your guns.

He believed there is no limit to what ordinary people can achieve if given the opportunity, encouragement and incentive to do their best.

So how did Sam Walton begin? He grew up during the great depression and started selling magazine subscriptions at around 7 or 8 years old. It taught him the value of money: how much hard work it took to get it and that when you did it was worth something.

When it came to Walmart he readily admits he was cheap. He’d stay at lower end hotels, two to a room and eat at family restaurants. Why? Every time Walmart spends a dollar foolishly, it comes out of the customers’ pocket. Every dollar saved puts Walmart one more step ahead of the competition.

He had high drive and ambition. His mother instilled the belief in him to try to be the best he could at whatever he did. Consequently he set high personal goals with a strong bias towards action.

At a young age he learnt an early secret to leadership: speak to people walking past you before they speak to you. This simple but effective technique was used later when he introduced greeters to all his stores.

From a financial point of view, here’s a key story on ‘how Walmart did it’:

If you buy an item to sell in a store for 80 cents, pricing it at $1 could sell three times more than pricing it at $1.20. This means that you’ll get half the profit per item but a greater overall profit. This is simple economics but the essence of discounting: you cut your price to boost your sales to a point where you earn more at the cheaper retail price than by selling the item at the higher price.

Sam’s first store had a lot of experimenting. Even when business was good, he constantly fiddled and meddled. This contributed to Walmart’s later success. Every crazy thing tried didn’t turn out well but he didn’t make any mistakes that couldn’t be corrected quickly and none were big enough to threaten his business.

After travelling on an all-night bus journey to visit and observe two other stores and how they ran their business, Sam’s next store introduced checkout registers at the front after seeing them work effectively. Self-service replaced the clerks and cash registers around the store commonly seen up until then.

Soon he opened a second store and continued innovating, experimenting and expanding. He nosed around other stores looking for good talent, luring them over with an offer to earn a percentage of the profits and the option of partnership. Colleagues have said that he’s less afraid of being wrong than anyone else they knew. Once he was wrong he just headed in a different direction. He was always looking for ideas and items to make his stores stand out.

Sam would drive to check out new locations to build more stores to expand to. Then when this started taking up too much of his time and the places to see were further away, he bought a plane and flew there.

Any money made in one store was put into another one which led to rapid expansion. Up until this point all the stores were variety stores that were franchises but after travelling and observing competitors, Sam could see that discounting was the future and opened his first larger discount store called Walmart in 1962. This was quickly followed by a couple more. The stores were not attractive to look at and highly promotional but sold merchandise cheaper than others. Sam was experimenting to see if people would shop there strictly because of price. It turned out they would.

In the early days the focus was on low price and satisfaction guaranteed. Customers could be sure the product they bought was the cheapest and if they didn’t like it, they could bring it back. Mark up never went beyond a certain percentage. It was imperative any good deal Walmart got was passed onto the customer.

What he initially lacked in experience and sophistication he made up for by spending as much time as possible checking out the competitors. He’d tell his store managers not to focus on what the competition were doing wrong but see what they were doing right. Any idea they got they must try to incorporate into their own stores.

He enrolled in a computer class for retailers and utilised them to control merchandise and logistics. He realised that he couldn’t expand beyond the small amount of stores that he had unless he had everything recorded to control his operation. The expansion of Walmart to what it is today would not have been possible without the computer.

Because of his strong belief in the company, Sam had taken on a lot of personal debt to expand the business. He’d borrowed as much as he could and to continue increasing the number of stores, the next logical step was to take the company public which he did, issuing stock on 1st October 1970. This reduced his family’s ownership of Walmart to 61% but all his personal debts were paid off and he never had to borrow any money for Walmart personally again.

He continued with the strategy of putting discount stores in small towns that other discounters were ignoring.

He called his employees, “associates” and shared the profit of the company with them. He believed the more you share with them, the more profit the company will make, due to the fact that the way management treated associates is the way associates would treat the customer. If the customers are treated well, they will return again and again.

This was one method of keeping associates motivated and keeping them motivated will allow them to do the best job possible.

He created a corporate culture within the company that encompassed a “whistle while you work” philosophy. He believed in doing lots of work but having a good time doing it and building spirit and excitement to keep people interested and make them feel part of the family. No one was too big to be the butt of the joke. In fact, Sam himself once danced the hula in a grass skirt on Wall Street after losing a bet.

In 1979 Walmart achieved a big milestone. With 232 stores they had made $1billion in sales. Around this time, Walmart participated in acquisitions of other discount chains to further expand their territory — in particular the south of the USA. By 1984, there were 640 stores with sales of over $4.5billion.

Walmart is now the biggest retailer in the world. However, in Sam’s view the bigger Walmart got the more essential it was to think small. They have become a huge corporation by not acting like one. In a store they still don’t forget to look a customer in the eye, greet them and ask politely if they can help. Here are some other ways to think small which Sam implemented:

This way of thinking has allowed Walmart to grow between annual rates of 30%-70% for the first 30 years of its existence and then continue to grow; leaving a legacy that changed the way retail worked.

Buy the book Sam Walton: Made In America, which helps me provide more great content for free.