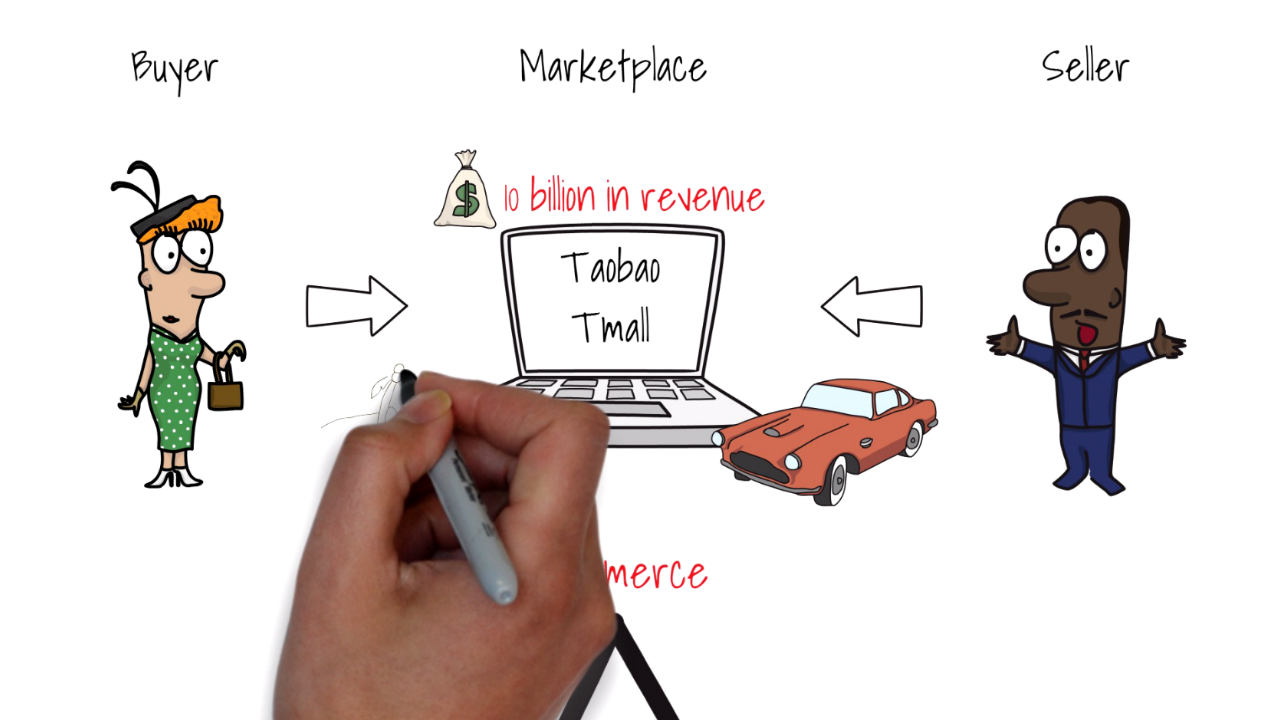 Jack Ma is an English teacher turned Internet entrepreneur who founded the Chinese e-commerce company called Alibaba. It is the Amazon of the East, but it has more impact on the retail sector of China than its rival has in the USA. More people make purchases on Alibaba’s websites per year then there are people in the United States of America.

Alibaba is a dominant force today thanks to what Jack Ma describes as the “Iron Triangle” – strength in e-commerce, logistics and finance.

Alibaba’s websites carry no inventory. One of them, called Taobao, is simply a platform to serve as a marketplace for individuals and traders, nine million of them in fact. No fees are charged for a buyer or seller to use Taobao; the company makes its money from advertising on the site. The process of buying a product online with Alibaba is very similar to buying an item in real life. You can chat with the vendor to haggle a price or you can peruse the product via a webcam.

Alibaba also have another website called Tmall. Tmall contains a number of luxury brands and big retailers. They pay Alibaba between 3-6% commission on their products and the website has proved extremely popular, becoming the 7th most visited site in China. Between the two sites, Alibaba makes $10 billion a year in revenue.

Online shopping is more popular in China than in the West, accounting for more than 10% of all retail purchases in the country, compared to only 7% in the US. It’s equivalent of Cyber Monday is called “Singles’ Day”, which occurs on 11th November every year. Sales on that day in 2015 reached $18 billion. More than 40% of consumers buy their groceries online in China. That figure is only 10% in the United States. Alibaba caters for people from every financial background. Cars are popular items on the website. Even entire islands are for sale for the superrich.

For this e-commerce revolution to take place, you need couriers, and lots of them. They’re on foot, on bikes, on trucks and on trains. To keep costs low, ingenious shortcuts are performed such as passing packages over subway barriers to avoid paying extra tickets. Whilst the couriers are private and not owned by Alibaba, they do have a stake in a logistics firm that provides a platform to interlock together couriers, distribution centres and warehouses. This logistics network provides maximum efficiency.

Financially, a tool that gives Alibaba an edge is Alipay, its PayPal equivalent, but it handles three times more in terms of online transactions. Alipay was owned by Alibaba but is now controlled personally by Jack Ma with its value estimated at $45 billion. In 2015, Jack launched an internet-only bank. Alibaba offers credit to many customers and with full access to their customers trading history, it has an advantage over traditional banks when assessing credit risk.

Surprisingly, Jack Ma has no background in technology. He does have charm and charisma which often allows him to get his own way, similar to Steve Jobs and his “reality distortion field”. His ability to speak fluently in both English and Chinese as well as a sharp wit make him an excellent communicator. Jack’s mantra puts the customer first, employees second and shareholders third. This allows him to focus on long term ambitions without having to sacrifice them to satisfy the shareholders with profit in the short term.

Born in 1964 in a city 100 miles from Shanghai, when Jack was born China was isolated from the world with most industrial production being controlled by the state. When Jack was a teenager, China opened its borders to tourists and he gave them free tours in exchange for being taught English. He did this for nine years and it was a tourist who recommended the English name, “Jack”.

Jack struggled with mathematics but did scrape into a local, not particularly prestigious university. He graduated with a degree in English in 1988 and began to teach the language. He also worked part-time on his new business focusing on translation, called “Hope”. The venture was not particularly successful and he started to sell goods on the street to supplement its income.

His expertise in speaking English led to him being asked by a Chinese county government to go to America to assist translating a business deal dispute. It was here he first used the internet. After being told you could find information on anything, he discovered there was next to no information on China. This inspired him to create his second business venture, China Pages, an online directory of Chinese businesses seeking overseas clients.

Jack quit his teaching job on his return to his home country to focus on China Pages. However, despite early success it struggled financially as it was simply a listings directory with no means to purchase products so the amount they could charge businesses was restricted. Eventually Jack was squeezed out of the company after partnering with a larger firm to ease cashflow problems.

In 1999, Jack founded his third entrepreneurial attempt called Alibaba, a business to business trading platform. He picked the Arabic name because it was well-known, easy to pronounce in many languages and appeared near the top of any alphabetical listing. The launch coincided with huge growth in internet users in China and a fall in the cost of PCs.

Jack and a small team including his wife worked on Alibaba 24/7 in his second-floor apartment in Hangzhou. He raised an initial $5 million investment from Goldman Sachs and other financial institutions, giving away 50% of his equity. By offering its e-commerce services for free, Alibaba’s popularity grew. Further investment followed and a year after the company was founded, there was $25 million of investment. The money would prove invaluable when the dot-com bubble popped. Jack was strangely optimistic after hearing the bubble had burst, seeing it as an opportunity for Alibaba.

Having only spent five of the $25 million raised and venture capitalists now refusing to fund competitors, Alibaba expanded, hiring more foreign workers to increase its appeal to overseas buyers. Jack toured the world promoting the company; his speeches proving particularly popular. However, 2001 and 2002 were still very tough years. Jack’s motto at the time was to “be the last man standing” to eventually win.

Despite the David Vs Goliath battle, Taobao did have some advantages over eBay’s China site. Its site was built specifically for the Chinese audience, rather than having to adopt eBay’s global branding which was alien to users. Taobao also had a different business model which meant that it didn’t charge merchants and shoppers any fees directly, unlike eBay, which attracted more people to the site. At the end of 2005, eBay only had a third of the market share while Taobao had 60%. eBay sold off its Chinese business, which soon disappeared completely.

Another company that tried and failed to crack the Chinese market was Yahoo!. After acquiring two businesses in China without much success, in 2005 Yahoo! let Alibaba take over control of China Yahoo!. They also gave Jack $1 billion for a 40% stake in Alibaba. The money helped Jack finish off eBay with Taobao, as Taobao wasn’t yet profitable.

After eBay left the Chinese market, Taobao increased its users from 30 million to 170 million in three years. Sales grew from $2 billion to $30 billion in the same period. After Alibaba.com the original business to business platform was launched on the stock market, demand caused it to be valued at $26 billion. The global financial crisis reduced the share price significantly, but Alibaba survived. In 2012 Alibaba bought back 50% of Yahoo’s stake in the company for $7.1 billion. In 2014, after Jack Ma turned 50, Alibaba went public on the US stock market with its initial public offering. It was the biggest IPO in the USA in history, with the company valued at over $230 billion after the first day’s trading.

So, what will the future hold for Jack and Alibaba? There are three factors that will cause the company to grow.

Alibaba has invested $1 billion into its cloud services which currently only provide 3% of the revenue for the business.

Only a quarter of the 700 million rural inhabitants of China are online. This figure is going to increase, unlocking potential new markets of merchants and consumers.

Cross-border trading has been a focus of Alibaba’s for a while, with the Chinese government encouraging companies to “go global”. It has increased its physical presence in Europe and the United States.

In addition to these factors, Alibaba has also been investing in health and happiness, buying pharmaceutical companies as well as making entertainment investments in sports teams and film studios. Jack himself has also created a philanthropic trust focusing on health care and the environment.

Jack Ma has built Alibaba into a worldwide giant and amassed a fortune in doing so, but Jack is still building and working to create the means to accomplish even higher ambitions.

Buy the book Alibaba: The House That Jack Ma Built, which helps me provide more great content for free.