Start Something That Matters by Blake Mycoskie 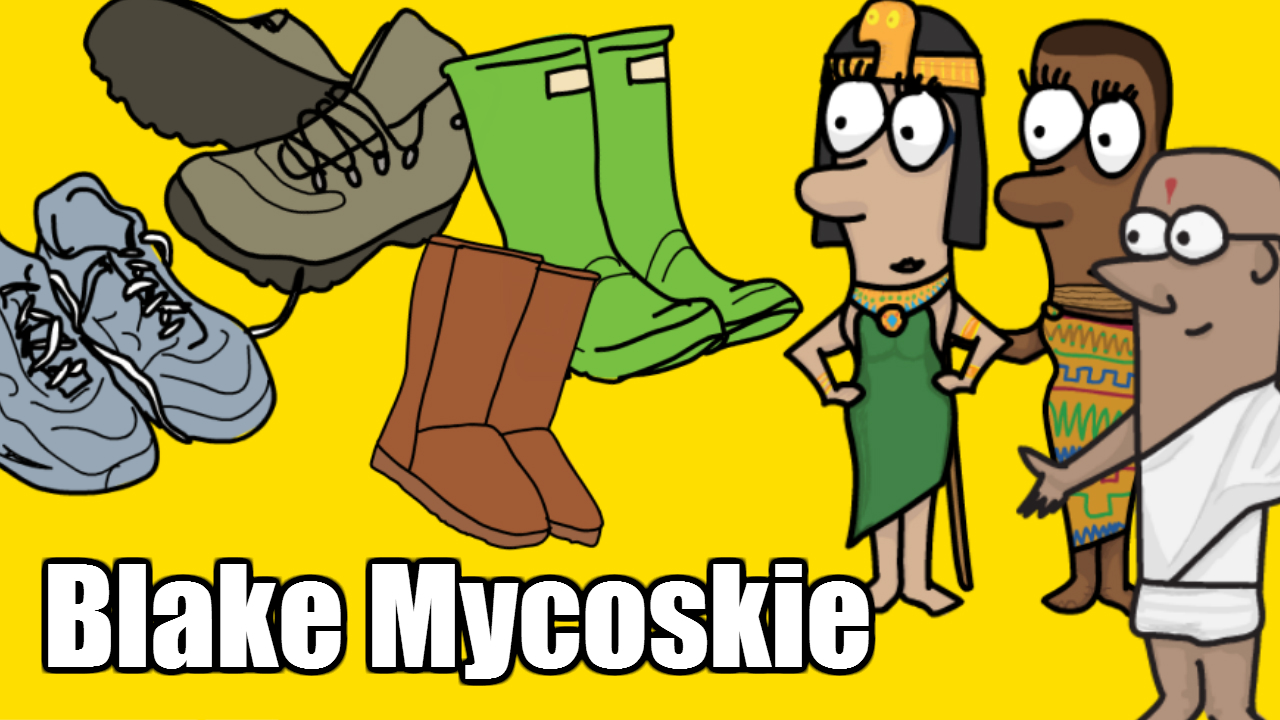 @OEudaimonia Awesome video! Thanks for putting this together!

In 2006 Blake Mycoskie was a 29 year old entrepreneur. He founded his first company when he was 19 and ten years on he was taking a break from his fourth start-up to go travelling in Argentina. During his travels he engrossed himself in the culture. He danced the tango, played polo, drank the wine and even wore the national shoe — the alpargata.

Later on in the trip he visited villages and poverty stricken areas and became aware that many children lacked shoes. Being barefoot meant blisters, sores and infections. He wanted to do something about it to help.

He first thought of a shoe-based charity but it would only last as long as there were donors. Then he thought why not use his existing entrepreneurial talents to create a profitable business which could help provide shoes for the children.

His idea became “TOMS” which stands for “Tomorrow’s Shoes”. It’s a shoe company that sells the alpargata shoe to US markets and beyond. For every pair sold, they donate another pair to a child in need, one for one.

He started the company with the help of his polo teacher Alejo, who primarily helped as a translator initially, as well as allowing the use of his family barn to work out of. After getting a local shoemaker on board and making 250 sample pairs, Mycoskie went back to the USA.

His friends loved the shoes, bought pairs from him and put him in touch with stores who might want to sell them. The shoe buyer at one of these stores loved them too and TOMS now had a retail customer. It wasn’t just the shoe people loved, it was the story behind the shoe and both could be sold.

Soon big breaks came in the form of articles in the Los Angeles Times and Vogue magazine. Orders for the shoes dramatically increased and even celebrities such as Keira Knightley and Scarlett Johansson were wearing them, creating yet more exposure.

After 10,000 sales, they returned to Argentina to give out the shoes. The next ten days they drove through the country handing over shoes to children in locations from schools to soup kitchens.

Seeing the impact of this work and the joy on the children’s faces made Mycoskie realise that this would become his life and he sold his other entrepreneurial endeavours. TOMS has become a huge social as well as financial and business success. He wrote this book as a guide on how to build something that will make a difference focusing on six keys traits. It shows you how to earn money, achieve fulfilment and make a positive impact on the world.

Having a story that’s compelling helps to attract attention from the press. It creates loyal customers who feel connected to a story that moves them. Stories help the human mind understand, make sense of, remember and plan our lives. This most primitive form of communication is being used today by smart companies who tell stories on YouTube and Facebook.

A story evokes emotion and emotion creates a connection. People make their decisions based on what the facts mean to them, rather than the facts themselves.

Mycoskie used to wear odd coloured TOMS shoes — red on the left foot and blue on the right — so that people would ask him why and he could tell the TOMS story. To spread your message, you should commit to telling the story at every opportunity.

Those who are successful face up to their fears and make plans to overcome them. Everyone who succeeds battles through adversity at some point, fear and setbacks are inevitable. Instead of focusing on the fear itself, which can grow and distort our behaviour, focus on your actions, which is something you can control. No matter what happens, life goes on. Everyone makes mistakes.

In the beginning, there were times when TOMS didn’t have the money to pay the bills. These were particularly scary moments. Mycoskie dealt with the fear by surrounding himself with interns. They’re enthusiastic and so new to everything that they don’t waste time being fearful. Surrounded by these people gave him confidence and made him feel young, rather than old and scared.

He also read biographies. Specifically biographies about people who focused their business on profit and a larger mission, such as Richard Branson or Howard Schultz. Learning how someone else was doing something similar to what he wanted to do, eliminated fear.

3. Be resourceful without resources

Many well known companies started out in improvised spaces.

Lack of resources is not a reason to avoid starting a company. It often inspires a competitive edge and creativity. If you have little money it becomes part of your company’s DNA so that when you expand you keep that efficiency and frugality to stay successful.

Develop a presence where it’s free — utilise social media. It’s a great equaliser of companies, regardless of how many resources the companies have.

When TOMS first started instead of renting expensive office space, Mycoskie became friendly with staff at a coffee shop he used to go into in LA. They let him start receiving his mail there and just like that, TOMS had an address on Hollywood Boulevard, which would help them get taken more seriously.

In design, simplicity rules. The iPod when launched was more expensive than competitor’s products, lacked a radio receiver and made replacing the battery difficult. It succeeded because of its simple design and ease of use due to it being less complicated.

TOMS shoes are based on the alpargata, which have been around for over 100 years and are simply a piece of canvas around the foot attached to the sole. This simplicity gives TOMS a blank canvas allowing them to create different designs and special editions with celebrity partners such as Charlize Theron.

Trust between employer and employee is the cornerstone of your business and your future. A leaders job is to motivate the staff and anyone else they’re in a position to influence. The better the employees feel, the better the business performs. Trust rather than authoritarianism allows knowledge and valuable contributions to come from anywhere in the business instead of just from the executives at the top. Powerlessness is the ultimate de-motivator. Giving away autonomy and giving the employee more responsibility empowers employees, making the organisation run more smoothly and leaves more time to spend on other issues.

Leaders who use qualities such as empathy, awareness and listening to people can be inspiring. They create loyal employees who are attached to the company. A leader can create a company but a community creates a movement.

Admit your own mistakes. Everyone makes them and if you admit them and work through them, you can treat them as an opportunity to build more trust.

TOMS once accidently created 6,000 shoes with too much fabric. They were fine at first but after a few weeks of wear, they became slippy. No customers complained but TOMS recalled the shoes at great cost. In the long run it showed they stood behind what they made and gained a great deal of trust.

If you lose the trust of your customers, you lose everything. You can build this trust by creating a powerful promise for the customer. Brands have built reputations by offering lifetime guarantees of their products, often replacing products with no questions asked. This wins loyalty and trusting these guarantees will encourage the customer to invest further.

At TOMS a lady emailed saying she needed two different sized shoes for a medical condition she had with her foot, but couldn’t afford two pairs. TOMS staff spoke to warehouse staff, had a custom pair made and shipped and the lady wrote back thrilled. A potentially irate customer had been turned into a potential evangelist for the brand.

Giving is good in two ways because it helps people and it makes money. When giving is incorporated into the business model, customers help market a product by telling people about it and the story behind it.

Giving helps the giver as well as the recipient. It will help you get through a bad day. You’ll love talking about your job and you’ll love your job itself a little bit more.

If a business is doing good, customers have greater reason to care about the work. It not only creates loyal customers, it retains the most amazing employees who want to be part of the story.

It also helps to attract great partners. Businesses want to partner with other businesses that are doing something good. TOMS has worked with Microsoft, Facebook and YouTube among others.

Social and economic priorities are merging in business. Profit-only focus risks alienating customers and not attracting the best talent.

However, it is important to give more than money. Being actively involved in giving is more fulfilling. Giving only money means you often don’t see its results or know exactly where it goes.

Blake Mycoskie’s company TOMS Shoes gave its one millionth pair of shoes to a child in 2010. In 2011, they moved into vision, creating one for one eye wear, providing eye treatment, eye surgery or glasses for every pair purchased.

His goal has evolved from creating a profitable company that helps relieve pain and suffering for children without shoes, into influencing other people to go out in the world and have a positive impact themselves.

By showing everything he’s learnt at TOMS, he hopes to encourage others to have the confidence to start something that matters.

Buy the book Start Something That Matters, which helps me provide more great content for free.