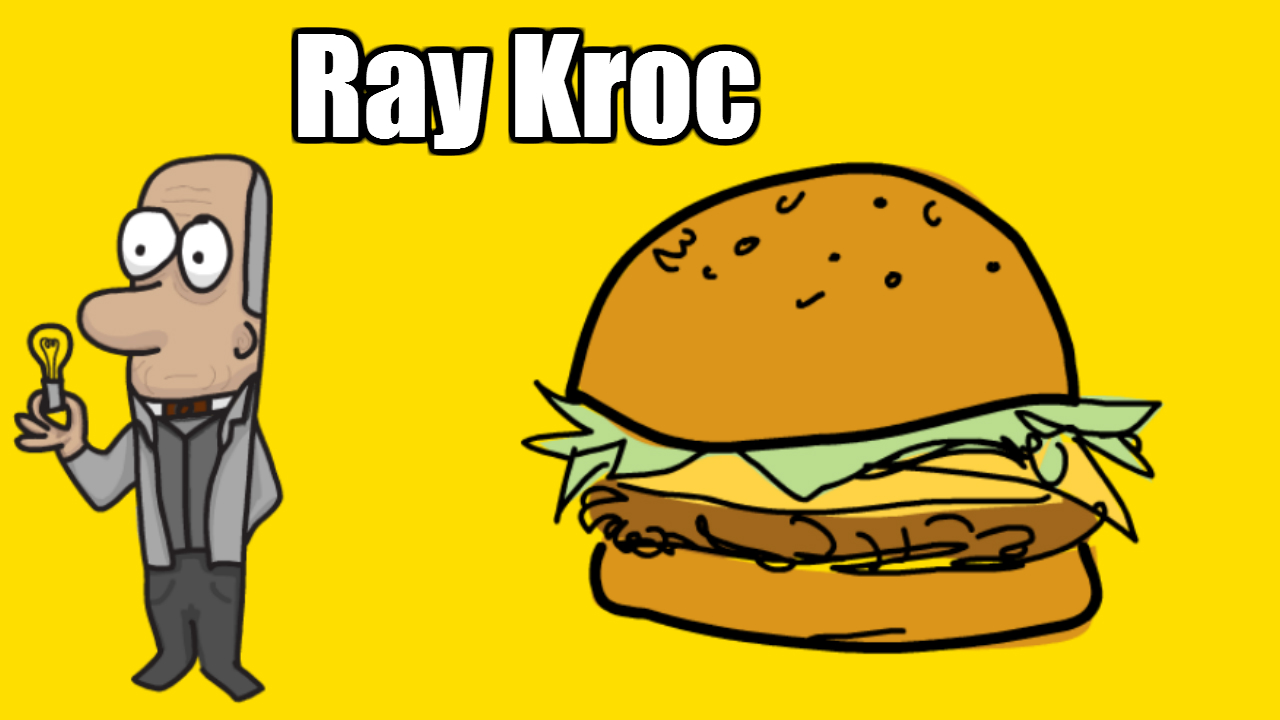 Ray Kroc is the man who turned McDonald’s from a single restaurant into the fast-food giant it is today.

His family did not have much money growing up but Kroc had a happy childhood. He liked playing baseball and learnt playing piano at the age of 6. He was also good at selling things, even at a young age. His entrepreneurial endeavours included running a lemonade stand and starting a music store with his friends. This early work set Kroc on the path to becoming a successful businessman.

In 1917, the United States entered World War I. At 15, he lied about his age to join the Red Cross and help the war effort. He trained to be an ambulance driver but the war was over before he could go abroad.

After the war, Kroc got married and had a daughter. To support his young family he took a job selling paper cups to restaurants. It did not take him long to become one of the best salesmen in the company.

He experimented with other jobs such as selling real estate and playing the piano but it was clear selling was what he did best. He returned to the Lily-Tulip Cup Company and became a sales manager for the Midwest region.

One of his customers was a businessman who owned several ice cream shops in Chicago. He had invented a machine that could make five milk shakes at once called the Multimixer.

Kroc tried to get his company to sell the Multimixer as he knew it was a great product but they were not interested. So in 1939, he made the huge decision to quit his job and start his own company selling the Multimixer to other restaurants and ice cream stands. As he was an excellent salesman, Kroc developed his company into a very successful outfit. He employed tactics such as inventing new drinks to make with his machine and a decade later he was selling over 9,000 Multimixers a year in cities all around the country.

By the 50s, Kroc began losing customers. People were moving from the cities into suburbs and drove to large restaurants instead of going to independent ice cream stands. As a result, the ice cream stands went out of business and were no longer Kroc’s customers.

Kroc was still getting plenty of business from one small restaurant. It was called McDonald’s in San Bernardino, California and they had eight Multimixers. Kroc went to visit the brothers who owned the restaurant, Maurice and Richard McDonald in 1954 and discovered it was a very small restaurant with people queuing up outside, ordering food from a window. The food was very limited as they only sold burgers, fries, soft drinks and milk shakes but the food was served extremely quickly.

Kroc thought the restaurant was a brilliant idea and suggested to the brothers that they expand their business. The brothers refused as they didn’t want the added responsibility.

Instead, Kroc offered to start a restaurant franchise. The three of them agreed that Kroc could use the McDonald’s name and the brothers would get a percentage of the sales. In 1955, Kroc started his franchise company, McDonald’s System Inc. and opened his first McDonald’s in Des Plaines in April that year.

The McDonald brothers taught him how to run the restaurant like they did, including how to prepare and serve the food in such a quick way, thanks to an efficient setup in the kitchen.

On the restaurant’s first day, Kroc made $366. He worked extremely hard at his restaurant to ensure it was a success, from picking up rubbish outside to make the restaurant look attractive and clean to training his workers to remember quality, cleanliness and service were all important.

Kroc also helped other people set up new McDonald’s restaurants as franchises. In the first year, he sold 18 franchises and by 1957 there were 40 McDonald’s.

This strategy worked and some franchise owners were making more money than Kroc was.

Kroc’s next step toward success was to set up a real estate company. The company would buy the land that franchisees could then rent to run a McDonald’s restaurant on. There were two major benefits of this system. One it let Kroc choose the location for each new McDonald’s and two, it made him a lot of money.

By 1960, Kroc sold his Malt-A-Mixer Company and McDonald’s System Inc. became McDonald’s Corporation. Kroc was sharing the profits from the 228 restaurants he now had with the McDonald’s brothers and in 1961 he agreed to buy the McDonald’s name from them for $2.7million to take sole control of the company.

Throughout the rest of the 60s, Kroc entered a period of vast expansion opening restaurants all over the US and into Canada and Puerto Rico.

He enforced his strict rules at each restaurant to ensure consistency and conformity but did allow franchisees to suggest new ideas. In 1962 in Cincinnati the Filet-O-Fish was added to the menu. In 1968 in Pittsburgh the Big Mac was introduced.

Kroc was also quick to acknowledge when he was wrong. The Hulaburger was introduced as a slice of grilled pineapple and two slices of cheese on a bun with no meat. It did not prove popular and was quickly taken off the menu.

Kroc pitched McDonald’s as family-friendly restaurants, promoting the fact that they were clean and affordable places to eat on TV and in magazines.

In 1963, Ronald McDonald was introduced as a playful clown, soon becoming one of the most recognised children’s characters in the world and a very successful marketing mascot. Many of his restaurants also introduced play areas where children could have fun to maintain the family-friendly theme.

1979 saw the rollout of Happy Meals to each McDonald’s. Each meal included a small toy and proved extremely popular with children. It therefore was also an extremely powerful marketing tool, allowing tie-ins with films, TV shows or toy brands.

Kroc became extremely wealthy from McDonald’s and donated part of his fortune to charity through donations and other charitable activities. He started the Kroc Foundation in 1969 to raise money to help fight diseases such as diabetes, arthritis and multiple sclerosis.

Kroc retired as CEO from the McDonald’s Corporation in 1973 but still stayed active on the board of directors and carried on working for McDonald’s until he died in 1984.

His legacy continues to this day and the company has over 36,000 restaurants in 119 countries.

Ray Kroc’s simple idea of making food fast, convenient and consistent has changed the way many people eat forever. His hard work, skill as a salesman and interest in innovation has helped McDonald’s become one of the greatest business success stories in the world.