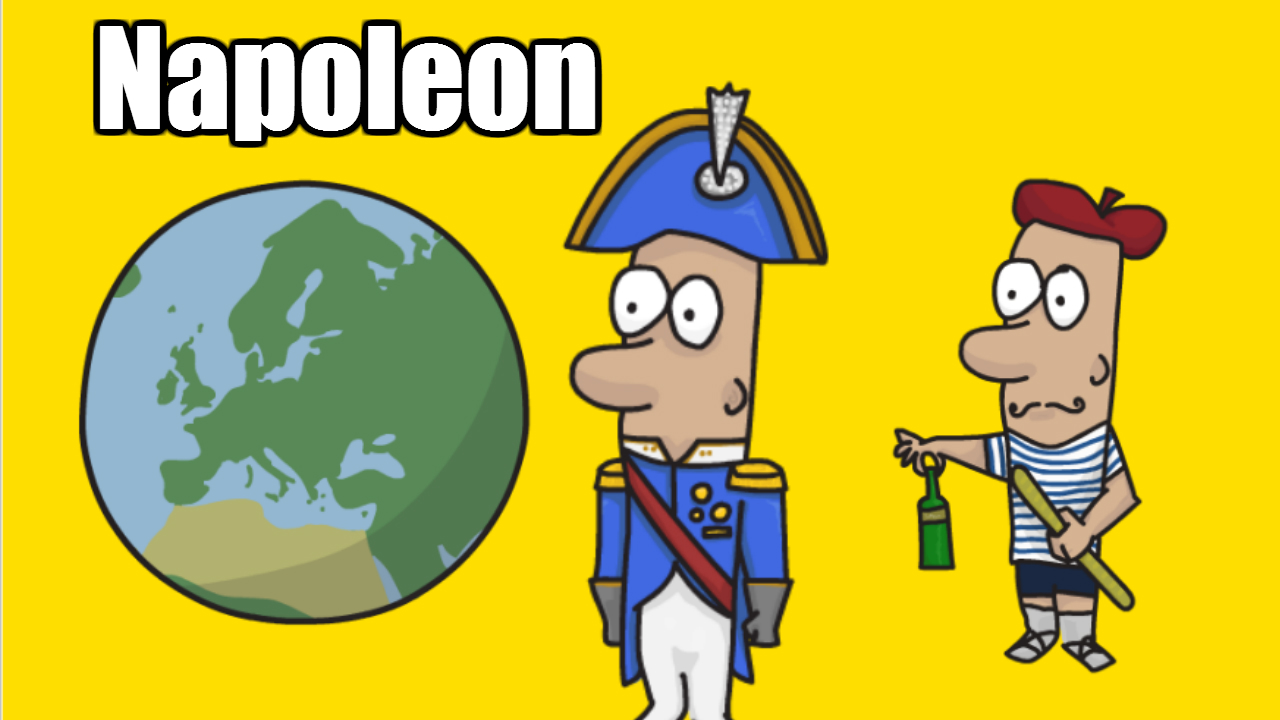 Napoleon Bonaparte was powerful for only a decade and a half but his impact lasted until near the end of the 20th century, nearly 200 years after he died.

He was born on 15th August 1769 on the island of Corsica, the second of eight children.

At the age of ten, Napoleon and his older brother Joseph left for mainland France. They spent a year at a preparatory school in Autun, followed by five years at military college and a year at the officer academy in Paris. By the end of these seven years, Bonaparte was a professional French soldier.

His brother left to become a lawyer but Napoleon became a second lieutenant in the artillery regiment. Their father died when they were young and Napoleon aged only 15 took over as head of the family.

He had a talent for mathematics and was a great map reader. These talents made him not only a tactician, but a strategist. He became first lieutenant in 1791. He read intensively whilst in the artillery, including Plato’s Republic. He also read biographies and books on histories — English history in particular — as he believed it to be a successful country.

During the start of the French Revolution, Bonaparte was promoted to Captain and then skipped the ranks of Major and Colonel to be promoted to Brigadier after showing intelligence and courage in equal parts whilst reorganising the artillery in Toulon for the French Republic against the Royalists.

In a battle called 13 Vendémiaire, Bonaparte quelled a Royalist revolt using cannons and the victory led to him becoming Commander in chief of the interior troops and in command of the Italian Army too. This led to his invasion of Italy in 1796 which was his first strategic campaign. It was a military triumph despite limited resources.

Aged 28, he was now seen as the most powerful man in the Republic in military terms but somewhat of a loose cannon. Therefore politicians wanted to keep him away from the capital, Paris. He hatched a plan that appealed to everybody: the conquest of the Orient. He wanted to play a modern Alexander the Great and acquire provinces heading east.

His expedition to Egypt managed to avoid Lord Nelson of Britain, who was commanding the Mediterranean and they captured a fortress and naval base in Malta before putting the island under French rule in less than a week. They continued onto Alexandria in Egypt and took it on 2nd July 1798. Then they marched south to Cairo before Bonaparte declared himself overall ruler of Egypt.

Meanwhile Nelson had destroyed the entire French fleet in the harbour in Alexandria leaving Bonaparte’s army marooned and Turkey also declared war on him. Bonaparte responded aggressively by invading Syria and taking Gaza. However, he failed to take Acre in Turkey, his first major military defeat and decided to return to Egypt and then France.

After travelling to Paris he took part in a coup where he implemented the forceful side of matters. After the coup was successful, he made himself Consul for Life on 4th August 1802 and Emperor on 18th May 1804. He justified his vast power by personally leading an army back to Italy which had been partly re-conquered by the Austrians, and retook it.

Bonaparte was now Emperor and a dictator with the title of Napoleon I. A new constitution was published and he was the first dictator to produce fake election figures. His coronation was staged on 2nd December 1804 at Notre Dame.

One of Napoleon’s greatest victories was the Battle of Austerlitz on 2nd December 1805, which saw French troops in Austria under Bonaparte’s personal command take on the main armies of Russia and Austria, who had joined forces. The opposition had 90,000 men and 280 guns whilst Bonaparte had 73,000 men and 139 guns, however he made the allied command believe he had only 40,000 men and they let him take up a defensive position. Bonaparte’s triumph was down to three reasons:

All in all this resulted in 27,000 losses for the allies and only 9,000 for the French. Austria agreed to peace soon after.

Bonaparte was married twice in his life. His first wife, Josephine, was older than him and infertile. Because of this he divorced her and married Marie-Louise, who bore him a son, Napoleon II who briefly succeeded him. However his heir came late in his life and therefore he did not treat his empire as a long term investment up to that point. He was quick at overturning governments and setting up new administrations but none lasted more than a few years.

The most successful aspect of his dictatorship was his promotion of French culture. With the help of key men in his empire, he restored France’s reputation as a leading producer of luxury goods and vast amounts of money was spent on sprucing up Paris, which was designated as the capital of civilisation.

Bonaparte’s downfall began as a result of Britain not willing to accept his conquests as legitimate. Their navy blockaded French empire ports and stopped any contraband goods arriving or leaving the ports. Bonaparte hit back by laying down decrees excluding British goods and services from the French empire and wherever France held influence. Governments not directly controlled by France made little to no effort to enforce these decrees which angered Bonaparte and led him into two wars against the Spanish and the Russians.

The reasons both wars were huge failures for Bonaparte were both country’s climate, lack of roads and bridges over rivers and small economies that couldn’t support unsupplied armies. Harsh summers and winters made life tough for troops without barracks.

In Spain, despite taking Madrid, uprisings meant a large occupying army would be permanently required. Bonaparte poured more troops in and beat the Spanish army several times but soon his troops had no food and no supplies. By January 1809 Bonaparte had had enough of Spain and returned to other business in his empire. The occupation of Spain was a failure and was one of the reasons he instead began a war against Russia, to compensate.

In January 1812, he began to mobilise a European army, with troops from Germany, Italy, Poland, Hungary, Austria, Bavaria, Netherlands and Switzerland. He could call on 650,000 troops, but the size of his army was its weakness, taking eight days to pass a particular point and stretching out between 50–100km making it an easy target.

The Russian plains in the summer were extremely hot and marching through them caused thirst and disease and halved the army’s effective strength. Both the Russian and the French sides took heavy losses in a battle 80 miles from Moscow. The Russians retreated and the French moved in on Moscow on 14th September 1812, looting the Kremlin. With the heavy winter snow imminent, Bonaparte could not keep the route to Moscow open and retreated. He was down to 95,000 troops and the majority of his horses were dead. The Russians counter-attacked and on 5th December, Bonaparte announced he was off to Paris to secure the regime, leaving his army and returning in only 13 days.

In March 1813, Prussia declared war on Bonaparte. The Pope was the next ally to desert. The Spanish army was under British control and was threatening to turn the French out and invade France. Along with a deteriorating French army due to the many experienced officers and fine horses lost in Russia, these were some of the reasons for the downfall of Bonaparte.

He began a war for Germany but after a couple of early victories refused to make peace. Austria declared war on Bonaparte in August 1813. This led to the Battle of Leipzig fought between 16th-19th October 1813. Bonaparte had 180,000 men. The Austrians, Prussians, Russians and others in the area had 350,000. Bonaparte was forced to withdraw with heavy losses and many of his troops surrendering or fleeing too. The French empire dissolved in ruin and Bonaparte now had to fight on French soil. French public opinion turned against him. On 6th April 1814, Bonaparte formally abdicated the thrones of France and Italy. He was then offered a small kingdom in Elba which he took, sailing to the island on 28th April. He had gone from ruling 80 million people to a territory of about 25,000.

A combination of boredom, financial problems and the failure of the French royalty to strike any sort of rapport with the French people convinced Bonaparte to make a comeback and return to France. This he did on 26th February 1815, arriving in Paris on 20th March. He had gathered support and troops en route and as a result, the Royalty had left Paris the day before.

The rest of Europe immediately formed a ‘stop Bonaparte’ coalition with the Duke of Wellington in charge. Bonaparte moved his army north and clashed with Wellington’s allied army and the Prussian’s army. This culminated with the Battle of Waterloo where Wellington’s army stayed resolute in defence for the whole day before attacking in the evening. By 9pm it was all over. The battle had brought an end to the Napoleonic and revolutionary period. Bonaparte abdicated on 21st June and gave himself up to the British in July. He was sent to the prison-island Saint Helena on 17th October 1815, aged 45. He lived on the island for six years, dying on 17th March 1821.

Soon after his death a myth emerged Bonaparte was a model ruler and a victorious soldier. The truth is that he was one of the greatest commanders in history whose military campaigns are still studied to this day.

Buy the book Napoleon: A Life, which helps me provide more great content for free.