The Everything Store: Jeff Bezos and the Age of Amazon by Brad Stone 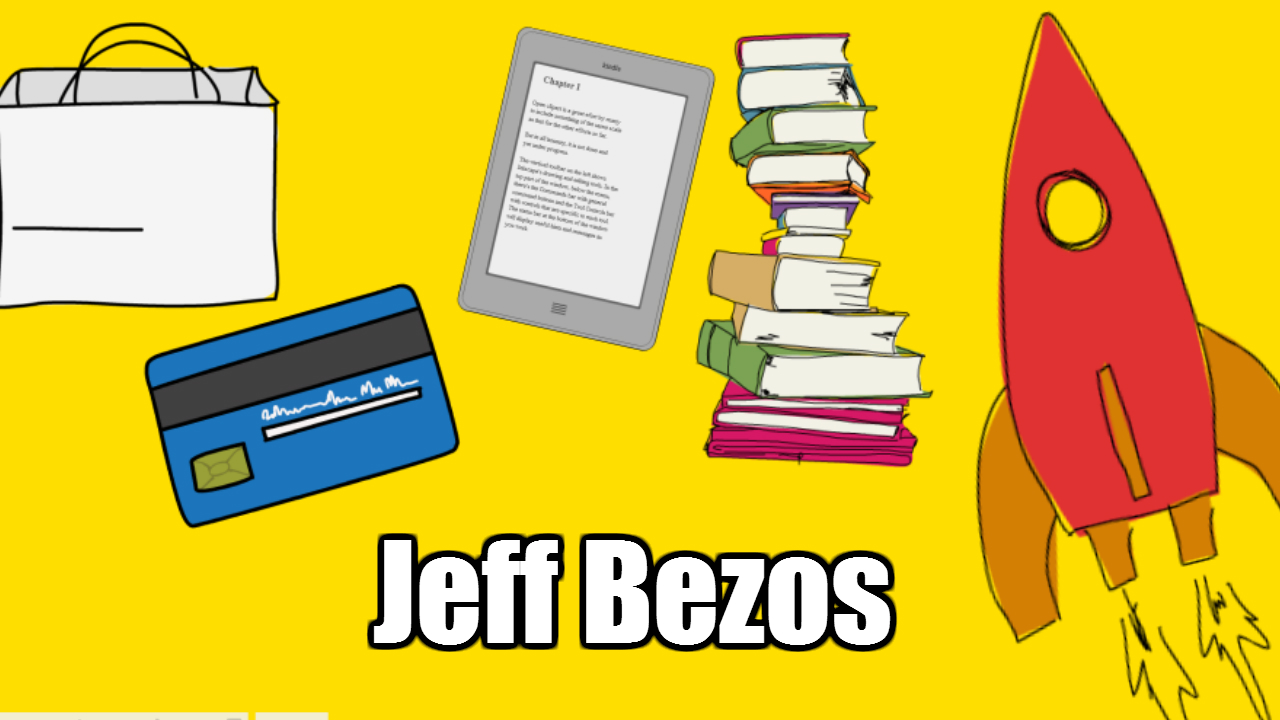 The idea for Amazon came to fruition in 1994. Over 20 years later the company employs over 90,000 people and has become one of the most well known businesses on the planet.

The visionary of this corporation was a gifted child and he’s evolved into a driven CEO, who with the help of the internet has created a single store that sells nearly everything. His name is Jeff Bezos.

Early in his career he showed many leadership qualities. He was charismatic, persuasive and confident.

He discussed creating an ‘everything store’ at the company he worked for, D.E. Shaw and Co. or DESCO for short, but knew that it was more practical with the internet in its infancy to focus on only one product category — books. He also knew it wouldn’t be his company if he pursued the idea at DESCO so he left his well paying job on Wall Street and settled in Seattle to sell books over the internet.

Bezos and his wife brainstormed for names for the company including relentless.com, which they still own and it still redirects to Amazon. Eventually in October 1994, Bezos was going through the dictionary and saw the word Amazon. It is earth’s largest river, so an appropriate name for what he envisioned to be earth’s largest bookstore. He registered the URL on 1st November 1994.

The first ever book bought was ‘Fluid Concepts and Creature Analogies’ by Douglas Hofstadter. It was ordered on 3rd April 1995.

In summer 1996 Amazon launched its first big innovation: paying other websites commission for a referral. This helped to create an industry we now know as affiliate marketing.

In spring 1998, Bezos felt it was the right time to expand beyond books. Music was picked as the first target, followed by DVDs. They also acquired many other websites such as the movie database, IMDB.com.

Amazon began poaching Walmart executives, more than a dozen moved over resulting in Walmart suing Amazon alleging they were stealing trade secrets. However, Bezos had read Sam Walton’s autobiography and it resonated with him, particularly Sam’s bias for action and his thriftiness.

Amazon continued to innovate and try new ideas. Personalisation was used on the site to help customers discover new items and ‘Sales Rank’ was introduced to show authors how they were doing. They also patented the ‘1-Click’ ordering process.

In summer 1998 Bezos met with two Stanford PhD students, Larry Page and Sergey Brin who had started a little company called Google. Bezos was impressed with them and invested $250,000 in the company. It is not known whether he sold some or all of his Google holdings but if he hasn’t, it is now worth over $1billion.

In 1999 Amazon expanded to toys and electronics. Also in 1999 sales were up 95% on the year before, there were over 20 million registered accounts and Bezos became one of the youngest ever receivers of Time’s person of the year award.

Despite all this expansion, Amazon was on target to lose more than $1billion in the dot-com bust era in 2000. It survived insolvency during the dot-com crash by slowing expansion and focusing on discipline, efficiency and eliminating waste.

In November 2000 Amazon launched ‘Marketplace’ allowing third party sellers to sell their products on the Amazon website in exchange for a small commission. This provided Amazon with a greater selection of products.
In January 2002 Amazon reported a net income of $5million, its first ever profitable quarter. The following year became Amazon’s first profitable 12 months.

After becoming one of the richest people in the world, in the year 2000 he secretly started a new company devoted to space exploration, something he’d thought and dreamt of since high school. The company is called Blue Origin and was first revealed in the press in 2003. The goal is to reduce the cost and increase the safety of technology that gets humans into space.

During this time Amazon was expanding into sporting goods, jewellery and other categories as well as expanding into other countries such as China and Japan. They had a competitive advantage over rivals by having a completely rewritten logistics network software system which allowed for efficient shipping of products and precise delivery times for customers. The introduction of ‘Amazon Prime’, a service that provided free two day shipping on any orders after a yearly fee which was initially $79 had been paid, turned customers into Amazon addicts.

However Bezos wanted to define Amazon as a technology company rather than a retailer. To do so they needed to invent new features. They introduced ‘Search inside the book’, a feature that allowed a customer to look for a specific word or phrase in a book they had purchased.

They also created a set of APIs that allow developers to plug into the Amazon website and publish parts of the product catalogue including descriptions and prices on their own sites. They could also use Amazon’s payment systems and shopping cart. This was the beginning of what is now called Amazon Web Services.

Amazon Web Services now sells computer infrastructure to other companies. They have some very high profile customers using its services and helped introduce the concept of ‘the cloud’.

It was now unquestionably a technology company.

Having seen Apple’s dominance in the digital music market, Amazon didn’t want to lose its core business — books — if they became popular in digital format too.

In 2004 Bezos started an experimental laboratory in Silicon Valley called Lab126. The mission was to create an e-book device and on 17th November 2007 the first kindle was unveiled. The kindle 2 was introduced in early 2009.

Also by 2007 the hard work endured over several years was paying off. Quarterly sales were over $3billion and yearly sales went on to be $14.8billion, more than its rivals eBay and Barnes and Noble put together.
After the dot-com bust, Bezos was monitoring a company he thought could be a potential rival, called Netflix. At the time they specialised is DVD rental and later moved into streaming and video on demand. Amazon decided to purchase LOVEFiLM, a company similar to Netflix that controlled the majority of the British and German market to give Amazon a strong foothold in the industry. Soon after, it offered Amazon Prime customers in the USA a video streaming service.

A couple of years before its 20th anniversary, Amazon had grown to over 88,000 full and part time employees. Over 2012 and the first half of 2013, its stock rose 60%. It acquired a company that built mobile robots for $775million, in the hope that one day they’ll replace humans picking objects in Amazon’s warehouses, or fulfilment centres as they’re known as within the company.

Bezos himself not only is in charge of Amazon and Blue Origin, he owns a venture-capital firm called Bezos Expeditions which holds stakes in Twitter, Uber and Business Insider. He also owns the Washington Post newspaper since 2013.

Despite all this his main focus is still Amazon which with Web Services, video streaming and other technologies, he’s turned into not just and Everything Store but an Everything Company.

Buy the book The Everything Store: Jeff Bezos and the Age of Amazon, which helps me provide more great content for free.