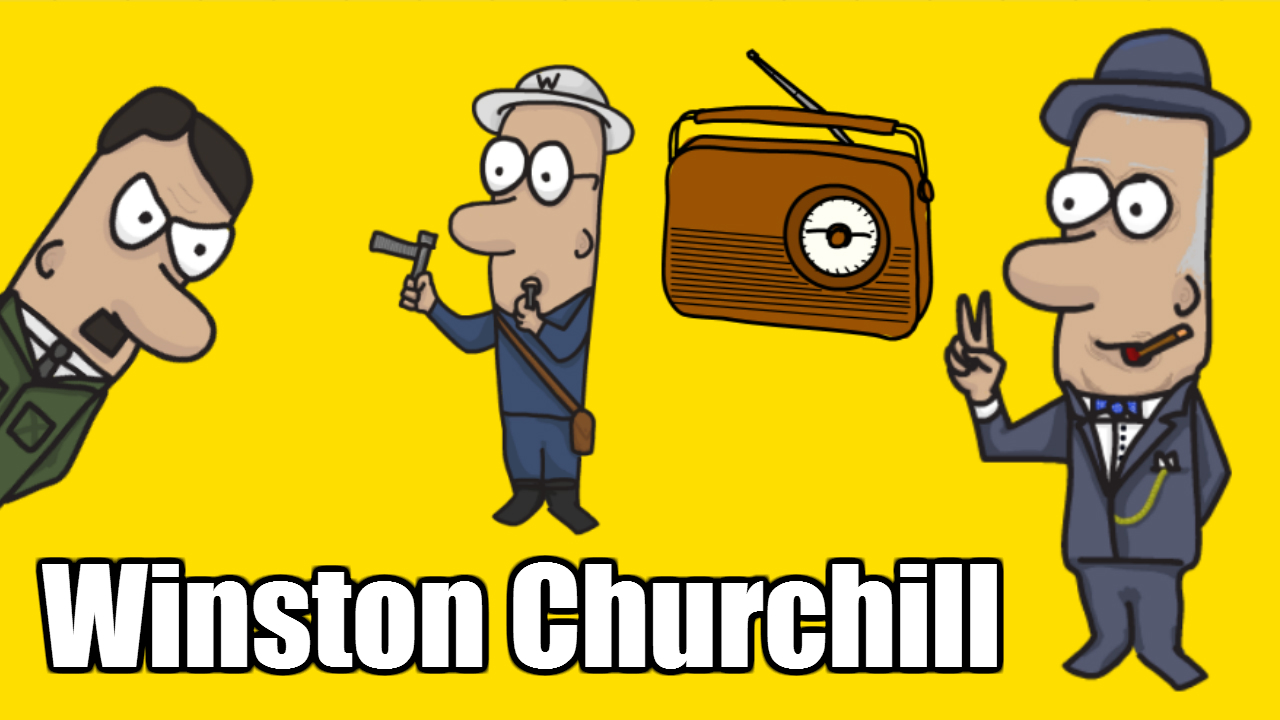 Don't know much about #Churchill? Watch this animated short video on his life and accomplishments. #History https://t.co/WckTxv4rdz

Winston Churchill was born in Blenheim Palace on 30th November 1874. His father was an English politician, however despite eventually having the same job, Churchill got most of his prominent characteristics from his mother, as his father was at first too busy and then struck with illness, passing away when Churchill was 20. Churchill and his American mother were both full of energy, ambition and courage, with a passion for adventure.

He did not do naturally well at school and was written off as an academic failure by his dad. It was mutually decided by both of them that a career in the army was what lay ahead for a young Churchill.

When in school he developed a fluency in the English language. This mastery allowed his words, both written and spoken, to be his main source of income from the age of 21. He wrote a lot; many articles and books, some of them long. His account of the Second World War is over two million words.

As a soldier he served in Cuba, India, Egypt, Sudan and South Africa. He returned to London with several medals.

It was on his return that he first ventured into politics, winning a seat in 1900 and making his first speech in the House of Commons in 1901 at the age of 26. Eventually he would go on to make 500 speeches in that room over the course of the next 60 years.

He joined parliament as a Tory but switched to a Liberal in 1904. He was not a political party man and his loyalty belonged to the national interest and his own. When he eventually lost his seat in 1922, he returned to the Conservatives.

He joined the cabinet at the age of 34, becoming president of the board of trade. Shortly after this in 1908 he got married and went on to have a son and four daughters.

His political career continued to rise, becoming Home Secretary. This office he held he later admitted he disliked the most, in particular when exercising the power to confirm death sentences.

He later took the government into the oil industry, creating an oil company now known as BP.

Churchill’s responsibility also included the Royal Navy and he formed policies to increase the ship construction rate after seeing Germany increase theirs. It meant that when the First World War began, the British fleet was ready.

When the Belgians were about to surrender Ostend and Antwerp in the war, Churchill was ordered to go to Antwerp and take charge. He was delighted to and held the city for a week, allowing three chief French channel ports to be secured in the meantime.

Prime Minister Asquith was thinking about a coalition with the Tories which would require Churchill to be removed of his position in charge of the Royal Navy and this occurred when Asquith began to fight for his own political survival.

Churchill was determined to return to the front line and fought in Flanders in 1915. This service in the trenches helped him in both World Wars as it enabled him to understand the views of the ordinary soldiers.

Asquith was eventually ousted in 1916 and Churchill returned as an unofficial advisor on the war to new Prime Minister Lloyd George. By 1917 he received an official title: Minister of Munitions. Within a year, the British Army was better supplied with weapons than the French or Germans. He also made sure the Americans arriving at this time were never short of munitions either.

After Lloyd George won another election in 1918, he put Churchill in charge of the Army and Air Force. In 1921 he also became head of the Colonial Office.

A year later in 1922 Lloyd George was forced to resign and his coalition government split, leaving Churchill, nearing 50 years of age, with no office or seat in parliament.

Throughout his life he nearly always drank champagne at meal times. He had a special room in his house for his cigars, but never had more than 12 a day.

A couple of years later in 1924, Churchill returned to the House of Commons, winning a seat with a large majority and promptly joined the Conservatives, where he’d stay for the rest of his career. Prime Minister Baldwin had just won the general election and made Churchill the Chancellor of the Exchequer.

As Chancellor he introduced five budgets, each with a two hour speech superbly delivered with majestic language. They were very popular in parliament and the country as a whole, described as “the great events of the parliamentary year” by The Times newspaper. One aspect where his persona changed completely was defence. From building a fleet of over 1000 warships when in charge of the Navy, as Chancellor he became stingy, being particularly hard on plans to replace the ships.

Despite performing well as Chancellor, his Prime Minister lost the 1929 election and he lost his job as a result. He also resigned from his seat on the Conservative front bench over the issue of allowing India to self-rule, which he was against. He went to America to lecture and write. His fortune whilst over there was not great. Despite earning lots of money from his writings in the past, he lost it all in the Wall Street Crash. Then he was seriously injured by a car after looking the wrong way when crossing the road.

In 1933, Adolf Hitler came to power in Germany. Churchill initially had no success in alerting public opinion to the danger of Germany, despite expressing the view that aerial warfare would be devastating and told the house that 40,000 Londoners alone would be killed or injured in the first week of war. Eventually by 1935 his speeches started to make some progress.

After the Nazi invasion of Poland, Britain and France declared war. Soon after, Churchill was invited to accept his old post as head of the Navy, which he did along with a seat in the war cabinet.

During this time he received a letter from Franklin D Roosevelt offering friendship which Churchill accepted allowing Britain and the USA to be brought closer, something which would prove invaluable in the coming years.

Prime Minister Chamberlain was heavily criticised for Britain’s failure to stop Norway being taken over by Nazi forces and with his support dwindling, he decided to resign. On Friday 10th May 1940 Winston Churchill got the job of Prime Minister, twelve hours after the Germans had begun their campaign against France.

His first victory over Hitler was won over the air waves. Whilst Hitler was the most popular leader in German history from 1933–39, the German people did not want to be lead into a World War. When he invaded Czechoslovakia in March 1939, it was his first major unpopular act. Hitler ceased to make public speeches after sensing his loss in popularity. Churchill on the other hand increased his presence in newspapers and newsreels with a series of memorable and electrifying speeches.

Churchill sensed the importance of air power and the opportunities it offered. He instructed his aircraft production minister to go flat out and British production overtook German both in quantity and quality. The battle over British skies was won by Britain and the Germans resorted to night bombing. He paid tribute to the RAF fighter pilots in a speech: “Never in the field of human conflict was so much owed by so many to so few”. This victory in the Battle of Britain allowed Churchill to then go on the offensive.

In late 1941, Hitler declared war on America. This would prove to be his biggest mistake. Japan was already attacking Britain and America but Churchill persuaded Roosevelt to defeat Germany first. This would be the most important act of persuasion in Churchill’s entire career.

He got the Americans to agree to a joint landing in Africa which succeeded and all Axis forces there surrendered. Then followed Churchill’s invasion of Sicily and Italy, causing the Italians to switch sides and join the Allies.

There was also Churchill’s campaign of heavy bomber assaults on Germany. Despite things going badly wrong elsewhere, these raids kept his popularity high. Churchill was not held back by humanitarian motives and the raids killed 600,000 German civilians and destroyed the remainder’s morale.

The Allied invasion of North West Europe was timed correctly by Churchill and was necessary to defeat Germany. It was achieved with minimal loss of life for so hazardous and immense an operation.

By the end of the war, Churchill was 70 years old. He wanted to continue the coalition government but was forced to begin an election campaign with the Tory party. Labour won and in 1945 Churchill was out.

In opposition his main task was to arouse the world to the dangers presented by the power of the Soviet Union under Stalin. In 1951, Churchill returned to power. In 1953, the Queen made him a knight and in 1955 he handed over the reins and stepped down as Prime Minister, staying as a Member of Parliament until 1964. He died the following year, aged 90 having lived a full life and is now seen by many as the greatest Briton that ever lived.

So what can we learn from his life?

Buy the book Churchill, which helps me provide more great content for free.