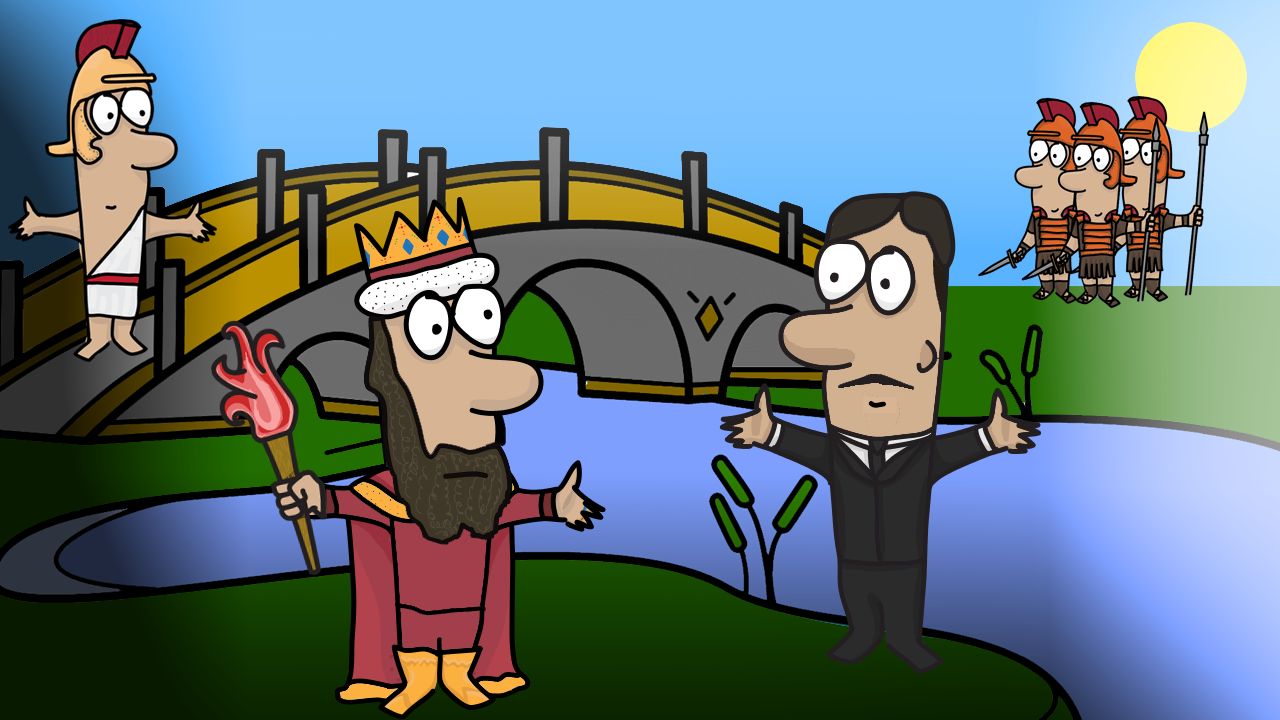 When in difficult country, do not encamp. In country where high roads intersect, join hands with your allies. Do not linger in dangerously isolated positions. In hemmed-in situations, you must resort to stratagem. In desperate position, you must fight.

A Roman Consul (Lucius Aemilius Paullus) once led his army into the enemy territory of Liguria. As soon as he had established a camp, some ambassadors came to see him with an offer of peace. In reality, these men were spies and after they agreed to surrender, instead the Ligurians returned a few days later in great number, attacking every gate of the Roman camp at once.

Do not stay in a dangerous place for too long. If you are in a particularly vulnerable position, it gives the enemy a greater opportunity to find and attack you. In business, being stagnant allows competitors to push you out.

What Not To Do

The French Marshal General of the seventeenth century, Turenne was considered by Napoleon as one of warfare’s “Great Captains”. He once said: "It is a great mistake to waste men in taking a town when the same expenditure of soldiers will gain a province."

Don’t fight battles you can’t win. As well as missing out on victory, you will also lose the opportunity to succeed elsewhere. Show patience until a better opportunity can be created or emerges. It may take more courage, but can prevent catastrophes.

The general who thoroughly understands the advantages that accompany variation of tactics knows how to handle his troops.

The Duke of Wellington was a master tactician who avoided high-risk moves and dramatic victories. He knew his tactics intimately and was aware when to use them and just as importantly, when not to use them. Wellington cared about his men and conserved his troops. After several victorious battles against the French, he refused to pursue the remainder of the French forces over rough terrain as he knew there would be a cost to his own army.

Knowing tactics and techniques is not enough. You need to know when to use them. Skill is required to match the tactics to the situation and how to combine them. In business, a great strategy is useless if you can’t translate it into a solid but flexible execution.

A Student of War

So, the student of war who is unversed in the art of war of varying his plans, even though he be acquainted with the Five Advantages, will fail to make the best use of his men.

General Patton’s last assignment in the US Army was to compile a history of the Second World War in Europe. He explained to a journalist, the role was “right down my alley because I have been a student of war since I was about seven years old.”

His study of military history was central to his actions on the battlefield earlier in his career. He wrote several articles on warfare, using historical examples to answer current problems.

There are two ways to learn tactics: from personal experience or from history. The best leaders are accomplished practitioners and ongoing students. This allows you to learn what will work even before you’ve used it.

Hence in the wise leader's plans, considerations of advantage and of disadvantage will be blended together.

Superiority is a two-sided coin. When you have the advantage, the other side is disadvantaged and vice versa. At any one time, you can have both advantage and disadvantage. Your plans and actions need to take them both into account.

If, in the midst of difficulties we are always ready to seize an advantage, we may extricate ourselves from misfortune.

In 1415, Henry V’s English army marched across northern France and was confronted by a larger French force under Charles d'Albret.

The French only needed to block the route to English-held territory as the English were low on food and were suffering from the cold weather. However, when Henry’s men advanced shouting and flying flags, d'Albret took it as an insult and a challenge. He decided to attack and lead his men across a field of mud in the heavy rain.

The French soldiers slipped and fell, making themselves sitting targets for archers. Thousands of Frenchmen were killed or taken prisoner, while the English lost only a few men.

The art of war teaches us to rely not on the likelihood of the enemy's not coming, but on our own readiness to receive him; not on the chance of his not attacking, but rather on the fact that we have made our position unassailable.

Constantine the Great founded the city of Constantinople, which became the capital of the Roman Empire. It was built with huge, complicated defences which made it impenetrable to an attack for over 900 years from many different people. Giant stone walls surrounded the city and over the years they were built upon to create a double and then triple-wall fortification. The walls protected the city from being besieged by land or sea with hundreds of manned towers able to fight off invaders.

You can win any battle as long as you always defend successfully. Always being ready to take on opponents is the best strategy to help achieve this.

There are five dangerous faults which may affect a general:

(a) Recklessness, which leads to destruction

Julius Caesar’s ambition was so compulsive that it lead to his self-destruction. He gambled recklessly when it came to politics and his ruthless ambition led to him installing himself as dictator. After refusing to step down, members of the senate grew angry and fearful of his constant demands for greater power and they assassinated him.

Avoid recklessness by not reacting or making decisions based on dangerous emotions such as anger. Instead use facts and knowledge.

(b) Cowardice, which leads to capture

The Roman Emperor Commodus installed a former slave Cleander as a senior official and commander. After a famine had occurred, a mob of people blamed Cleander for the food shortage. He went to Commodus for protection, but the Emperor was a coward and became terrified. Instead, Commodus had Cleander killed. The Emperor’s behaviour led to him being assassinated himself, two years later.

In a battle you have to make decisions. If you decide not to fight even though it is necessary, you will not only lose the war, but do so in a shameful and dishonourable way.

(c) A hasty temper, which can be provoked by insults

Marcus Aurelius, the Roman Emperor and Stoic philosopher said that anger was a sign of weakness. Another Emperor, Valentinian I, demonstrated this and it ended up costing him his life.

Some envoys from a tribe in conflict with the Roman Empire met with Valentinian. They insisted that the dispute was caused by the Romans building forts on their land. Their attitude incensed Valentinian who suffered a burst blood vessel while shouting at them, causing his death.

(d) A delicacy of honour which is sensitive to shame

Saladin lay siege to a Crusader fortress while King Guy of Jerusalem assembled a large Crusader army nearby. Faced with the opportunity of raiding Saladin’s supply lines while he was preoccupied, Guy said it was a cowardly way to fight and beneath his dignity as a king.

Instead, he marched across the desert directly to Saladin despite not having access to fresh water. Saladin attacked the weakened Crusaders, defeating almost their entire army.

A sense of honour is mainly a good quality, but be careful if the thought of shame leads to losing actions, such as entering into an unwinnable contest.

(e) Over-solicitude for his men, which exposes him to worry and trouble

In the Battle of Cannae, Hannibal was prepared to sacrifice his weakest troops to achieve victory. The Romans put heavy soldiers in the middle of their line to break Hannibal’s front line. Aware of this, Hannibal put his light soldiers in the middle to move away quickly from the oncoming Romans. As the weaker troops retreated, the Romans were lured in and became surrounded by the stronger flanks.

Care for your workforce but don’t take it to excess. Do not let your concern for their well-being lead to unwise strategic decisions.

When an army is overthrown and its leader slain, the cause will surely be found among these five dangerous faults. Let them be a subject of meditation.

By finding any of these five faults in a potential opponent, a commander can devise a deception to take advantage of it.

In the Battle of Cowpens, American General Morgan made his men partially retreat, giving the impression of a full withdrawal. The reckless British Colonel Tarleton saw this and charged at the American line. Morgan had anticipated this and his men were well prepared to first defend and then overwhelm the British forces.

Avoid the five common faults highlighted and you will avoid many of the problems that plague leaders and their men.