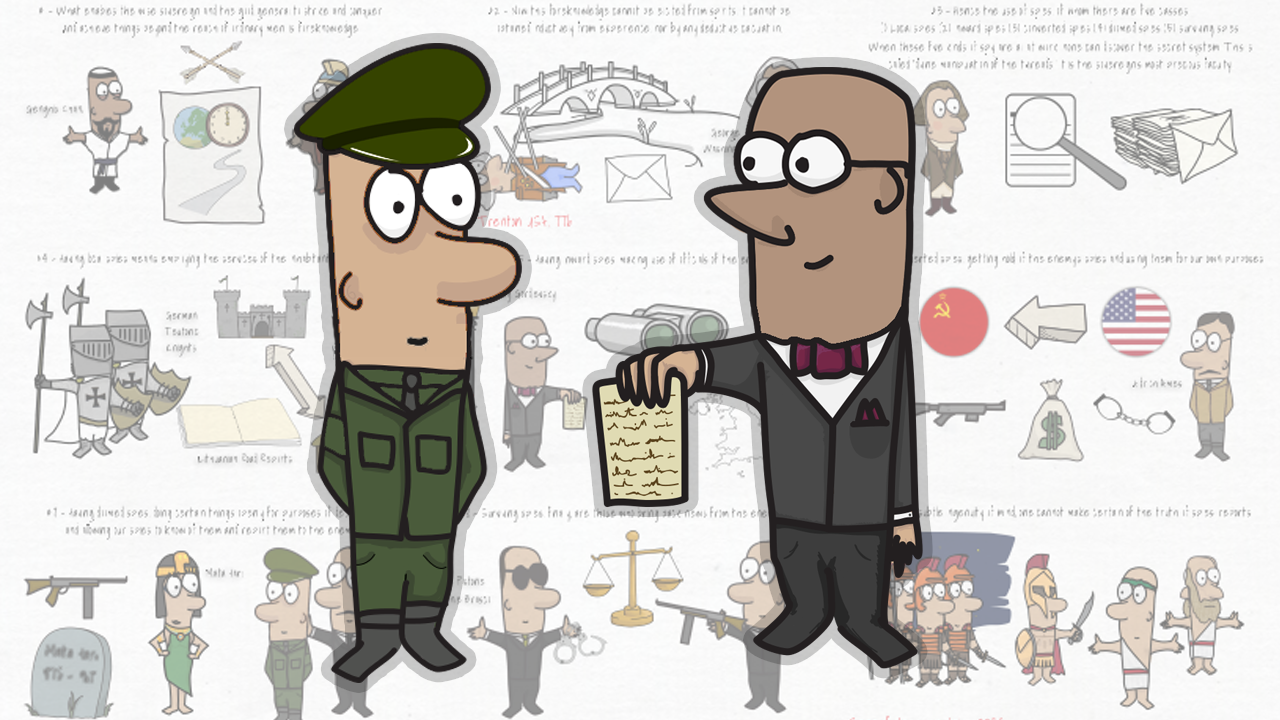 Sun Tzu said: What enables the wise sovereign and the good general to strike and conquer, and achieve things beyond the reach of ordinary men, is foreknowledge.

Genghis Khan ruled his Mongol Empire with the help of his primary military strategist, Subutai. Subutai was one of the most successful commanders in history thanks in part to ensuring a combination of scouting and spying in advance of any invasion.

Before the invasion of Europe, Subutai spent a decade sending spies deep into the continent. He made maps of the Roman roads, established trade routes and made well-educated guesses on the ability of each principality to resist capture.

Foreknowledge is the knowing of future events. When this is not possible, learn to forecast the likely behaviour of opponents. Seek out their strengths, plans and positioning. Real intelligence beats guesswork and at the heart of all good decisions is knowledge.

Now this foreknowledge cannot be elicited from spirits; it cannot be obtained inductively from experience, nor by any deductive calculation.

George Washington led his men across a river in a surprise attack to capture a group of Hessian mercenaries. After the Hessian commander was killed, an unopened letter was found in his pocket, written by a loyalist, giving him advanced warning of the attack.

If you make your decisions using boldness and gut-feeling, rather than reliable information, you are gambling. Making decisions based on bad knowledge will also prove ineffective.

Hence the use of spies, of whom there are five classes:

When these five kinds of spy are all at work, none can discover the secret system. This is called ‘divine manipulation of the threads.’ It is the sovereign's most precious faculty.

Oliver Cromwell, the Lord Protector of the Commonwealth appointed a number of spymasters, whose job was to gather all possible information about the enemy through the use of scouts and spies. Cromwell also had a postmaster general in charge of intercepting letters and deciphering codes. The postmaster also influenced the flow of news across the land. Much of Cromwell’s success in war was due to the previous knowledge of the enemy's moves he gained in this way.

Gaining information on competitors can give you a significant advantage.

Having local spies means employing the services of the inhabitants of a district.

In the Crusades, intelligence was crucial. In northeast Europe, German Teutonic Knights battled the Prussians, Latvians, Estonians, and Lithuanians.

The Teutonic Knight’s castles and Lithuanian settlements were separated by hundreds of miles of wilderness. The Crusaders were helped by local scouts allowing them to launch regular campaigns across this land.

The scouts local knowledge helped them produce the Lithuanian Road Reports which acted as a travel guide for the Crusaders in the Baltic. The reports were compiled over 18 years and specified routes into the hostile territory.

Local spies are common people within enemy territory. If the people where the enemy is situated do not like the enemy, you will be able to persuade these individuals to spy for you more easily.

Having inward spies, making use of officials of the enemy.

Oleg Gordievsky, was a colonel of the KGB but while he was a resident in London in the 1980s, he was also working for the British intelligence service as a secret agent.

Having such a high ranking official working with them was extremely valuable to the British. On one occasion Gordievsky helped avert a potential nuclear confrontation.

He was recalled to Moscow and interrogated after coming under suspicion, but escaped by being smuggled out with British help.

Internal spies are officials of your opponent. They can be convinced to work for you, either by financial reward or by amplifying an existing discontent they have with the enemy. Persuade them you’ll win the battle, and your chance of turning them is much higher.

Having converted spies, getting hold of the enemy's spies and using them for our own purposes.

Aldrich Ames had worked for the CIA for 30 years as a counterintelligence officer but for nine of those years he had been a double agent, passing on American secrets to the Soviet and then Russian intelligence services.

He revealed the identity of over 30 American agents and after ten of them were executed in the Soviet Union, the FBI began searching for an internal traitor. Ames passed two lie detector tests thanks to his training but was eventually caught after spending his $4 million payment from the Russians.

Converted spies refer to the enemy’s own spies being used against them. Beware of enemy spies pretending to be double agents as they can never be fully trusted and could in fact be acting as triple agents.

Having doomed spies, doing certain things openly for purposes of deception, and allowing our spies to know of them and report them to the enemy.

During the first World War, Mata Hari, the exotic dancer and high class prostitute, spied for Germany in Paris. She obtained valuable information from being around politicians and military men.

In 1917 the French intelligence service intercepted a coded message which showed she was working as a German spy. She was subsequently arrested and executed.

The Germans had known the French had already broken the code and wanted them to read the message. The Germans wanted Hari out of the way and this ensured that the French would do the actual dirty work.

Doomed spies are expendable and fed information (that is often false) so that it may be discovered by the enemy’s own spies.

If one of your spies is compromised, you can still use this to your advantage. Have other spies spread information about the doomed spy to your opponent; you may lose one spy but allow another to gain greater confidence and access to better intelligence.

Surviving spies, finally, are those who bring back news from the enemy's camp.

Agent Joe Pistone spent six years undercover infiltrating the mafia. As a spy planted by the FBI, he was given the name Donnie Brasco and had access to otherwise unobtainable intelligence. He was therefore a valuable asset that was protected. His total collected evidence led to over 100 mafia member convictions.

Surviving spies are ones who focus on bringing back reports. Spies are only useful if they provide you with information.

Without subtle ingenuity of mind, one cannot make certain of the truth of spies’ reports.

Siege of Nequinum, Italy, 299BC

While the Romans were besieging the city of Nequinum, two men who lived there dug a tunnel out to a Roman outpost. Offering to secretly escort the Roman soldiers back into the city, the Romans had to confirm whether the men were indeed traitors or whether it was a trap.

They decided to hold one of the men as a hostage and send the other through the tunnel accompanied by two Roman scouts. Once it had been determined that the tunnel was not a trap, the Romans sent 300 soldiers through it at night, taking the city by surprise and putting it under Roman rule without fighting.

Be aware that spy reports may not be accurate. They may contain weak or even false information. There is also a chance they are working against you. Find ways to verify and confirm what your spies speak of.

Be subtle! be subtle! and use your spies for every kind of business.

In Spartan society a type of brutal, internal surveillance was developed, to keep its slave population under control. Young military men were appointed by the state to act as secret police and discover any potential unrest or attempts at a slave revolt. Every year, the Spartan state declared war on its slaves, allowing the Spartan secret police to kill troublesome slaves without fear of punishment.

You can use spies in a variety of creative ways, including using them in your own land to find dissenters. You can also position them in other areas to understand and then influence the local environment.

Whether the object be to crush an army, to storm a city, or to assassinate an individual, it is always necessary to begin by finding out the names of the attendants, the aides-de-camp, and door-keepers and sentries of the general in command. Our spies must be commissioned to ascertain these.

Elizabeth van Lew was a spy in the American Civil War. As a landowner, she freed all her slaves and then used them as spies and informants behind confederate lines. Her spy network for the Union army was so successful that General Ulysses S. Grant later said that the intelligence he received from van Lew was the best information that he received anywhere and that she was a main factor in them winning the war.

When you are on a secret mission, many seemingly unimportant people who you come in contact with can become extremely important. These people can be persuaded to not interfere or perhaps even help, but be weary as they may also see or overhear you and report their findings elsewhere.

You can get a lot of information from those who say little but hear much.