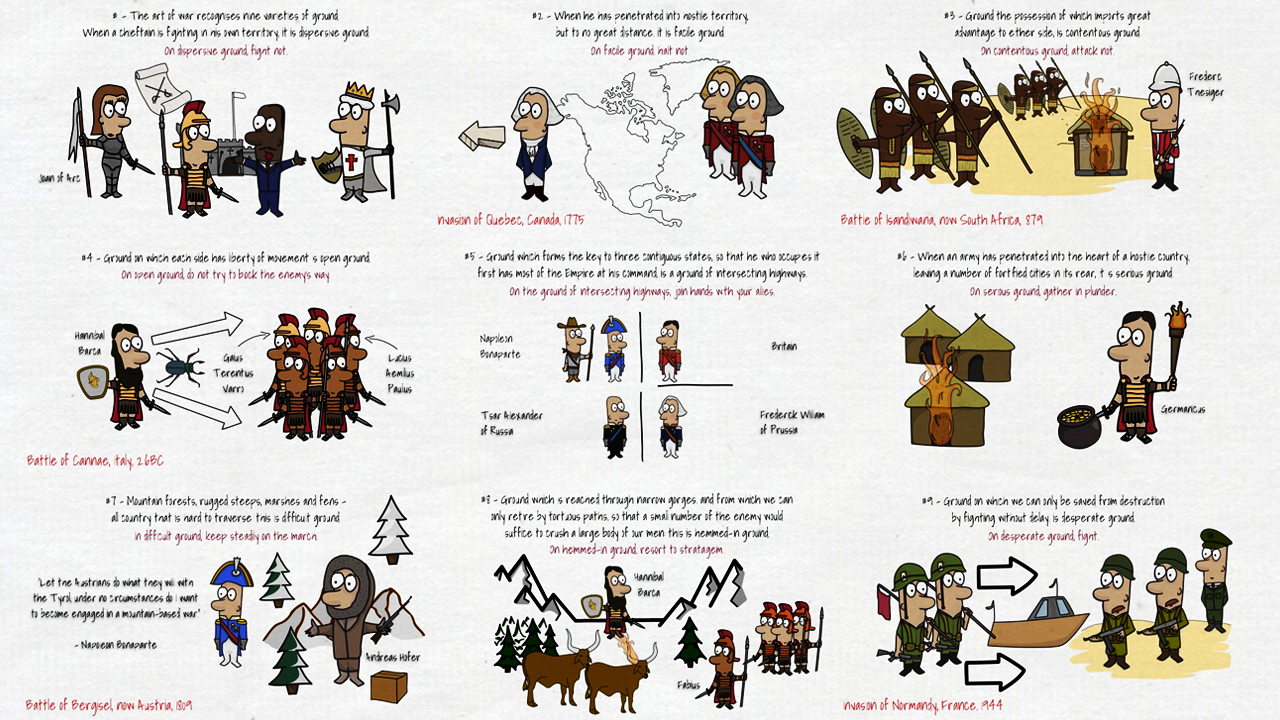 Joan of Arc was a victorious commander in many battles during the Hundred Years War in France, but what was arguably just as impressive was that as she approached with her army, thirty towns and cities surrendered without a fight. These places had been invaded by the English and their allies, however Joan’s presence on the front line inspired the French troops, whilst simultaneously intimidating the English.

The fear that Joan of Arc caused, stemmed from a letter she wrote prior to her first battle. Writing to the English, she demanded they surrender all the cities they captured in France and leave the country. Anybody who disobeyed her request would be killed. Her initial aggressive attacks showed they were not empty threats and frightened future targets to the point where they capitulated without any blood being spilt.

Alexander the Great won many battles with the sword, but so did Martin Luther King using other methods. Winning without fighting on your own land requires you to change the heart and mind of your opponent.

Use the advantage of knowing your own turf to make an opponent realise they do not have a chance.

When he has penetrated into hostile territory, but to no great distance, it is facile ground. On facile ground, halt not.

In 1775 the U.S. Continental Army tried to capture Quebec and persuade the rest of Canada to join their rebellion.

After initially entering Canada they took several cities and forts, but after losing a battle at Quebec city, they then decided to try to siege the city which proved disastrous and gave time for the British to send reinforcements to the area. The Americans were forced to retreat and lost all the territory they had originally taken.

The element of surprise and being close to home makes the early part of an invasion easier. Do not stop moving when first entering enemy territory as losing a battle could leave your land open to attack.

General Frederic Thesiger led most of his British soldiers from their camp to attack what he thought was the main Zulu force, as part of the British invasion of Zululand.

Thesiger had failed to set up his camp defensively and ignored information that the Zulus were close by. He was tempted away by a smaller Zulu force that were creating a diversion, leaving the main Zulu army to attack the camp. The camp was annihilated and the British were forced to retreat out of Zululand.

If you are on ground which would be advantageous to both you and your opponent, these are where battles are often at their fiercest. You are likely to be attacked on this ground, so your first priority should be to defend it rather than pushing on to attack.

Ground on which each side has liberty of movement is open ground. On open ground, do not try to block the enemy's way.

Battle of Cannae, Italy, 216BC

Trying to block an enemy on open ground leaves you susceptible to be attacked from more than one side. In extreme circumstances, you could be completely surrounded. This is what happened at the Battle of Cannae between Hannibal’s Carthaginian army and the Roman forces led by the two commanders, Varro and Paullus.

Hannibal had won previous battles using trickery, so Varro wanted warfare in an open battlefield where his larger army could not be ambushed by hidden soldiers. Paullus was more cautious, believing it was foolish to fight on open ground.

When the two forces met each other, Hannibal had weakened his infantry in the centre and ordered them to implement a controlled retreat. Using a Pincer movement, Hannibal then managed to surround the entire Roman army with his quicker, stronger flanks and kill nearly all of them.

When on ground where you can move easily, use quick movements to deflect and manoeuvre the enemy into positions where you can overpower them. Be vigilant as both sides have the same ease of movement.

As Napoleon expanded his kingdom, he was at war with three other empires: Britain, Prussia and Russia. He headed East into what used to be Poland. Prussia, Austria and Russia had each taken chunks of Polish territory so that it no longer existed as a state. So when Napoleon turned up in Warsaw, many Poles turned to him for help and joined the French against Russia and Prussia.

Napoleon used a strategy of isolating his enemies and taking them out one at a time.

In Polish territory, he met Tsar Alexander of Russia in peace talks and they became allies. Frederick William of Prussia was left out from the discussions and as a result his empire lost out when the land boundaries were redrawn.

If in a position where there are many rivals with different objectives and many possible directions to go, join together with allies who have similar interests to take control.

When an army has penetrated into the heart of a hostile country, leaving a number of fortified cities in its rear, it is serious ground. On serious ground, gather in plunder.

Germanicus went on a punitive expedition to attack the Germanic tribes that had previously destroyed several Roman legions in battle. His intention was to terrorise the enemy by pillaging and burning deep in their territory. Rather than leading to a battle and confrontation, these raids were designed to strike fear into the opponents, by highlighting the consequences of acting against the Roman empire. The speed and destructiveness of the raids maximised the psychological impact by exposing how vulnerable the enemy was.

If you are in an area where the enemy is all around you, great caution and vigilance is required. Where your opponent can approach, take what you can and move on.

“Let the Austrians do what they will with the Tyrol; under no circumstances do I want to become engaged in a mountain-based war.” - Napoleon Bonaparte

Napoleon’s words about mountain warfare proved to be wise as Andreas Hofer led a rebellion of peasants against the occupation of their homeland by French and Bavarian troops.

The peasants employed guerilla tactics up in the mountains by being highly mobile and using sharpshooting skills to pick off their opponents. The soldiers were used to fighting on a battlefield and weren’t familiar with the terrain. The peasants utilised the difficult ground by creating artificial avalanches. The end result was thousands of soldiers killed and captured weapons that would supply the rebels for months.

If passing through some land is difficult, keep going, as stopping could prove even more hazardous. Do not engage your opponent in these tough circumstances.

Ground which is reached through narrow gorges, and from which we can only retire by tortuous paths, so that a small number of the enemy would suffice to crush a large body of our men: this is hemmed-in ground. On hemmed-in ground, resort to stratagem.

When Hannibal was hemmed-in on a road surrounded by mountains by his opponent, Fabius, he devised a cunning strategic plan to escape. At nightfall, he tied bundles of twigs to the horns of 2000 oxen and then set the twigs on fire. The bizarre show of lights moving extremely quickly down the road, which Fabius’ men did not know were terrified oxen, caused them to panic and leave their position on the road, allowing Hannibal and his troops to pass through unharmed.

If a path is narrow with limited access it could be a great area to protect, but could also leave the possibility of being trapped. Employ the right strategy to use it to your advantage.

On D-Day, as the allied landing crafts got as close to the beaches of Normandy as possible without running ashore, the allied soldiers inside were left with a decision. Listening to the bullets hitting the outside of the boats, they knew that once the door opened they would have to wade through the water to the beach facing oncoming fire in a very vulnerable and exposed position. There was a chance they would not even make it out of the boat at all.

However, in these circumstances there was no point staying in the vessel. The mentality required at that moment in such a desperate situation is that of “do or die”. They may die anyway but there's no point in standing still. In such a position, the only positive decision is to move, even if it is into the unknown.

What these men did took extraordinary character, stepping forward without knowing what would happen but doing it for victory, if not for themselves, then for others.

When your back is against the wall and you are in a desperate situation that requires strong character, you have no option but to fight.