Born to Run by Christopher McDougall 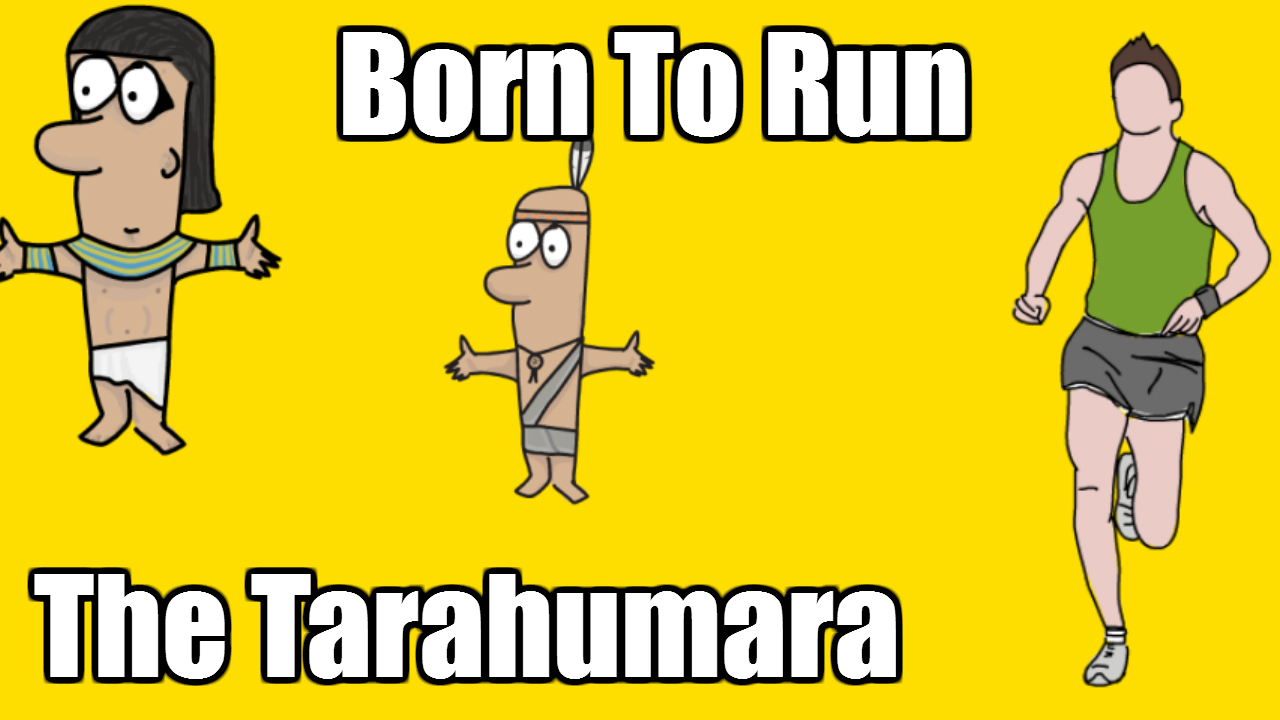 @OEudaimonia gorgeous! beautifully done and so thoughtful. I'm beyond flattered.

This book is about a journey. A journey that begins by the author asking his doctor why his foot hurts. He ran two to three miles every other day and the answer from his doctor and several other specialists he saw was “because running is bad for you”. But why was it bad for some people and yet other can run without injury?

He discovered the answer by travelling in search of the Tarahumara tribe from Mexico, arguably the greatest runners of all time. They live in the sides of cliffs in a wilderness called the Barrancas and very few outsiders have seen them in action.

The Tarahumara diet mainly consists of ground corn and barbequed mice, washed down with corn beer. They don’t have anything in the way of sports drinks full of electrolytes but think nothing of facing off in running races lasting two whole days.

The Tarahumara secrets behind their superhuman feats are well hidden. As well as living in the most remote wilderness of North America, they shun outsiders and are extremely bashful and modest, only being seen when they want to be seen.

However, one outsider had managed to be adopted by the Tarahumara; he was known as Caballo Blanco or the White Horse.

Back in 1994 a man tried to tempt the Tarahumara away from their natural habitat and offered them corn in exchange for them to run some of the world’s toughest races. That year, he got two of them to run the Leadville Trail 100, a hundred mile race up in the Colorado Rockies.

They turned up wearing sandals and robes without doing any specific preparation for the run. After finishing their cigarettes on the start line they set off and promptly went to the front of the pack.

For the second 50 miles of the race you can have a pace setter run along with you to help. Team Tarahumara met a local the night before who agreed to run with them. Team Tarahumara finished the race 1st and 3rd, breaking the course record by 25 minutes and ducking under the finishing tape, not knowing that you’re supposed to run through it.

After the race the Tarahumara runners returned to their canyons but one man followed them – it was the local who ran with them in the second half of the race. His name? Well it was soon to be Caballo Blanco.

Since hitting his 40s Caballo Blanco had been getting bad running injuries. Nothing he did helped heal them so he decided to do what the Tarahumara do, wear sandals when he ran and ate their diet. Caballo Blanco built himself a hut with rocks by the river in the canyon and spent the next ten years running along the trails.

He had seen the Tarahumara been taken advantage of and wanted to organise a race to help support them, but he wanted to do it the Tarahumara way. He conceived the idea of a week of talking techniques and sharing tips and secrets, followed by a 50 mile run on the last day.

Seven people showed up to the first event: the author, who had never run 50 miles before and his trainer, two young ultra runners from the east coast of America, an ultra runner who was also a top photographer, a man known as Barefoot Ted, who was trying to master natural running techniques and Scott Jurek, the world renowned ultra marathon champion.

After arriving in Mexico, they had a 5am start and a 35 mile run to where the Tarahumara would meet them. When they got close to the location they sat down and took off their backpacks to take a rest. When they looked up there were six men in white skirts from the Tarahumara tribe surrounding them.

Over the next few days, more Tarahumara runners arrived from different areas until the day before the race there were 25 people.

The 50 mile race would involve 6500 feet of climbs and descents through the canyon in temperatures of close to 100 degrees Fahrenheit.

After just over six hours, Scott Jurek, arguably the best ultra marathon runner of his generation was narrowly beaten by Arnulfo, the Tarahumara champion. As each competitor finished, the cheers got louder and louder when they crossed the line.

Buy the book Born to Run: A Hidden Tribe, Superathletes, and the Greatest Race the World Has Never Seen, which helps me provide more great content for free.