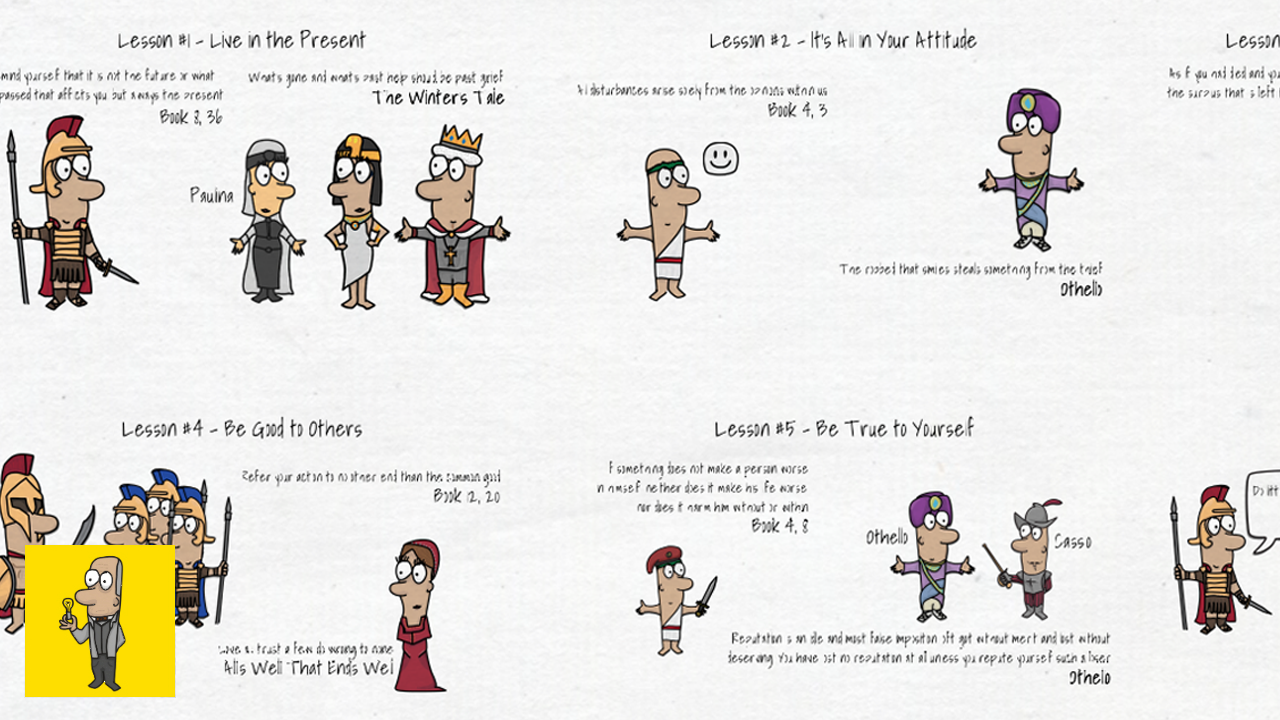 William Shakespeare and Marcus Aurelius (the great stoic philosopher and emperor) have more in common than you might think. They share a recorded birth-date, with Shakespeare baptised on 26 April 1564, and Marcus Aurelius born on 26 April 161 (Shakespeare’s actual birth date remains unknown, although he was baptised on 26 April 1564. His birth is traditionally observed and celebrated on 23 April, Saint George’s Day). But aside from their birth month (and a gap of over a thousand years), what links these two venerated writers? Shakespeare’s plays are a famed source of creative and dramatic inspiration, but are also mined for their astoundingly insightful commentary on human nature. In a similar fashion, Marcus Aurelius is best remembered for his Meditations, a set of pithy aphorisms on Stoic philosophy and guidance on life.

We’ve delved into Shakespeare’s plays and the contemplations of Marcus Aurelius, to bring you six enduring life lessons. Tired of the worries of modern living, social pressures, or concerned you’re not following your true purpose? Then watch on, help is at hand…

Lesson 1 – Live in the present

“Remind yourself that it is not the future or what has passed that afflicts you, but always the present” (Book 8, 36).

In this important meditation, Marcus Aurelius reminds us that we can’t change what’s already happened, and are equally incapable of predicting the future. It’s a method of avoiding unnecessary distress caused by “picturing your life as a whole,” assembling the “varied troubles which have come to you in the past and will come again in the future.” Paulina, the faithful friend of Queen Hermione in The Winter’s Tale would certainly agree with this. In true Stoic fashion, she apologises for condemning King Leontes, whose insane jealousy caused the death of their beloved Queen:

Lesson 2 – It’s all in your attitude

“All disturbances arise solely from the opinions within us” (Book 4, 3).

It is a key tenet of Stoic philosophy that external situations aren’t important, but it’s how you react to them. If someone has insulted you, instead of giving in to destructive emotions, rely on rationality and inner calm. Likewise, Othello agrees that if a wronged person can take his losses with grace, then he will be all the richer for it:

“The robbed that smiles steals something from the thief” (Othello, 1.3).

Lesson 3 – Live each day as if it were your last

Perhaps unsurprisingly, for both Shakespeare and Marcus Aurelius, death was a common feature of everyday life. They both return to the theme of the transience of human existence, and the relatively short time we’re given as “players” on the earthly stage. As life can end at any moment, we should make the most of it, and live each day:

“As if you had died and your life had extended only to this present moment, use the surplus that is left to you to live from this time onward according to nature” (Book 7, 56).

Lesson 4 – Be good to others

Given the limited time available, what should we be doing? Marcus Aurelius is very clear on this, stating multiple times that our purpose as social, rational creatures is to help our fellow humans:

Concurrently, the characters advocating goodness, mercy, and love are rife throughout the Shakespearean canon. This is perhaps most aptly summarised by the Countess in All’s Well That Ends Well:

Lesson 5 – Be true to yourself

Marcus Aurelius states that the only real tragedy is not being true to yourself. What others think of you is of no importance, but how you act and how you think are the only things of intrinsic value. He ponders on the significance of adversity:

“If something does not make a person worse in himself, neither does it make his life worse, nor does it harm him without or within” (Book 4, 8).

Shakespeare’s characters are no strangers to this maxim. Indeed, Othello reminds Cassio that external praise (which is easily won or lost) is of little significance—it’s his own judgement that matters:

“Reputation is an idle and most false imposition, oft got without merit and lost without deserving. You have lost no reputation at all unless you repute yourself such a loser” (Othello, 2.3).

Shakespeare and Marcus Aurelius are of one mind when it comes to the age old saying that “less is more.” We should focus on doing one thing well and thoughtfully, rather than rushing many things at once:

“Wisely and slow, they stumble that run fast” (Romeo and Juliet, 2.2).